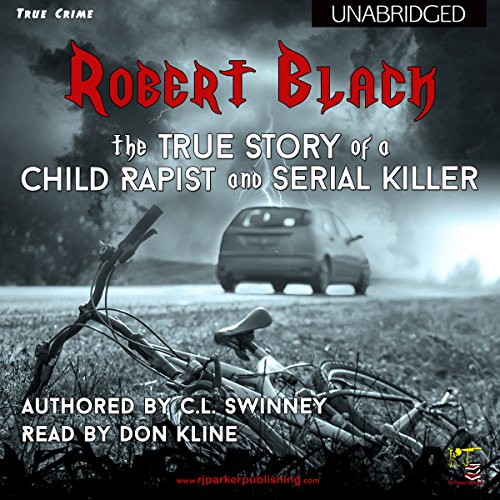 This audiobook contains graphic statements that some may find very disturbing.

Given up for adoption by his mother at only a few weeks old, Robert Black is placed with physically abusive foster parents, setting the tone for who, and what, he'd become - a pedophile and serial killer. Starting at the age of five, he recalls being sexually curious and began placing items in his anus at the age of eight. He'd sexually assault hundreds of little girls before committing his first murder. Sadly, as law enforcement stumbled along with no leads or evidence, Robert Black would strike repeatedly, destroying families and preying on innocent little girls in the United Kingdom.

Chris Swinney is the best-selling true crime author of:

He is also the author of the action/thriller Bill Dix Detective series.

Swinney is an active police officer/homicide detective in the Oakland, CA, area. He donates most of his royalties to various organizations such as: Juvenile Diabetes Research Foundation (JDRF), Cancer research, and PTSD/Military support groups. The proceeds from The Cartel Enforcers go to Koti Fakava's family, who passed away leaving his wife and five children.

What listeners say about Robert Black

Don’t waste your money. Narrator is the worst I’ve ever listened to and the story was mundane and uninformative.

it sucks boring worst book I have had so far.

this is the worst book I have read or listened so far. stay away boring.

The narrator is OK....just OK. The book itself is poorly written. Not worth the money or a credit.

The narrator was terrible with his sing song voice and evidently not stopping at commas or stopping in the middle of a sentence to catch his breath. I hung in there because the topic was interesting.