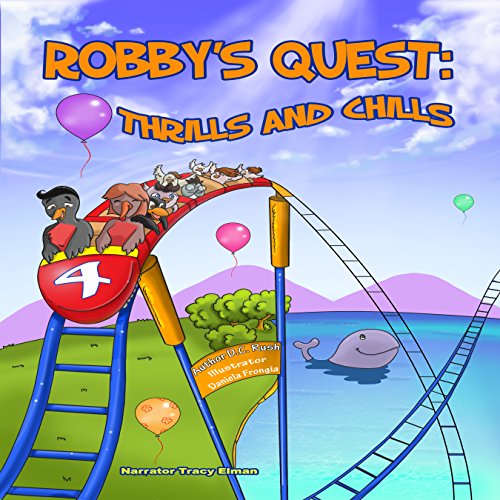 The world is a very big place when you're a little bird, but Robby and his flock of Robins, Mourning Doves, Sparrows, and a lone Blackbird are determined to see as much of it as they can.

Their latest trip takes them up the coastline from San Diego to San Francisco. This means that their friend Wanda the Whale can follow along too, bringing another Whale, Wilma, with her. Those aren't the only friends the birds have. They also meet Rhonda the Red Fox, Ollie the Owl, and Ellie the Eagle, who all play a very important role when two baby Robins from Robby's flock are kidnapped by a hawk.

The birds see some amazing sights on their travels, such as giant Redwood trees and the Golden Gate Bridge. They also get to ride on roller coasters and do bird bungee jumping!

This is another enjoyable and educational children's story from D.C. Rush about friendship, loyalty, excitement, and adventure with some unusual, but charming heroes and heroines.

What listeners say about Robby's Quest: Thrills and Chills

This is the fourth book in the Robby's Quest series. D.C. Rush is author and publisher and Chills and Thrills is Narrated by Tracy Elman, and Illustrated by Daniela Frongia and is available as an audiobook. After the Flock's adventure in Las Vegas they return to San Diego.

Telling their stories to their friends they discuss where they will go next. They want to travel to Ohio but it is too far so they decide to take smaller trips and work their way up the west coast.

The flock travels to San Francisco with there friends the Whales. The see the sights and visit Chinatown.  The stop by an amusement park along the way and ride some of the rides. These friends have so much fun.

This book teaches friendship, trust, leadership, and teamwork. It is a great series.

I received this book as a gift for an honest review.

A lovely story for children.

Not only is this a lovely story but it also teaches children about important qualities, such as obeying their parents, consideration for others, loyalty, friendship and trust.

What other book might you compare Robby's Quest: Thrills and Chills to and why?

The Robby's Quest series, and Hershey Learns a Lesson, all by the same author D. C. Rush, install important family values into children by subtly weaving them into engaging stories.

Which character – as performed by Tracy Elman – was your favorite?

I didn't have a favourite, I thought Tracy certainly bought all the story character's beautifully to life in a very appealing way for children.

Definitely, and I can see my Grandchildren wanting me to read it to them time and time again.