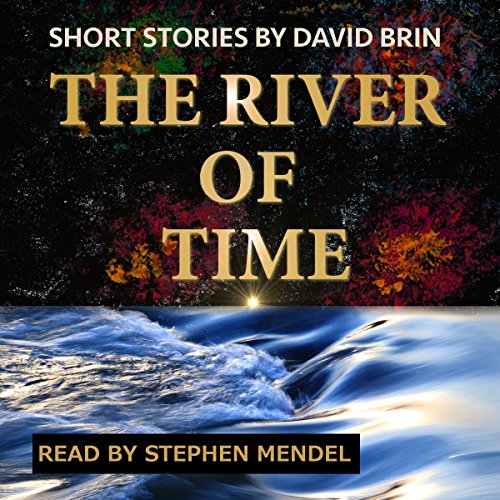 By: David Brin
Narrated by: Stephen Mendel
Try for £0.00

The River of Time brings together 12 of David Brin's stories, including "The Crystal Spheres", which won the Hugo Award for Best Science Fiction Short Story in 1985. Here are powerful tales of heroism and humanity, playful excursions into realms of fancy, and profound meditations on time, memory, and our place in the universe. Who guides our fate? And can we ever hope to wrest control for ourselves?

"The Crystal Spheres" offers a fantastic explanation for the Great Silence. Instead of being latecomers, might humanity have come upon the scene too early? "The Loom of Thessaly" merges classical mythology with impudent modern spirit in a science-fiction classic that speculates on the nature of reality. "Thor Meets Captain America" offers an alternate history exploring a chilling scenario behind the Holocaust. In this parallel world, the Nazis narrowly avoid defeat in World War II when they are championed by the gods of the Norse Pantheon. Listen to these and other speculations into the future of humanity in The River of Time.

What listeners say about River of Time

Would you listen to River of Time again? Why?

Yes, the depth of the stories lends itself to repeated listens

The Loom of Thessaly is perhaps my favorite short story ever

If you could take any character from River of Time out to dinner, who would it be and why?

Some stories are strong, some not so much.

This is an uneven anthology of Brin's early work. While some stories like The Crystal Spheres, The River of Time, and A Stage of Memory stand out as exceptional, others didn't really hold my interest.

Stephen Mendel has a fine reader's voice and a good sense of pacing. However, there are mispronounced words in almost every story in this anthology, and those errors immediately take me out of the story and cause me to distrust the narrator. I blame not only Mendel. but the producer of this audiobook for allowing such mistakes.

I like the author's notes. It's nice to get some perspective on the historical context of the stories and of the author's intention.