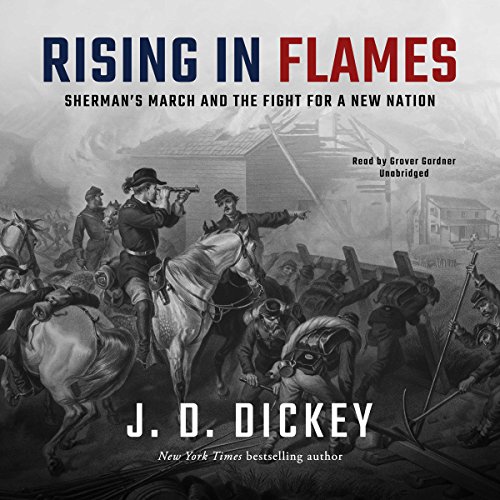 A New York Times best-selling historian sheds new light on Sherman’s epic “March to the Sea", especially the soldiers, doctors, nurses, and civilians who would change the nation for the better.

America in the antebellum years was a deeply troubled country, divided by partisan gridlock and ideological warfare, angry voices in the streets and the statehouses, furious clashes over race and immigration, and a growing chasm between immense wealth and desperate poverty.

The Civil War that followed brought America to the brink of self-destruction. But it also created a new country from the ruins of the old one - bolder and stronger than ever. No event in the war was more destructive, or more important, than William Sherman's legendary march through Georgia - crippling the heart of the South's economy, freeing thousands of slaves, and marking the beginning of a new era.

This invasion not only quelled the Confederate forces, but transformed America, forcing it to reckon with a century of injustice. Dickey reveals the story of women actively involved in the military campaign and later, in civilian networks. African Americans took active roles as soldiers, builders, and activists.

Rich with despair and hope, brutality, and compassion, Rising in Flames tells the dramatic story of the Union's invasion of the Confederacy and how this colossal struggle helped create a new nation from the embers of the Old South.

Rising in Flames tracks Sherman's relentless drive through the South through the stories of a marvelous and varied cast of complex characters, some good, some cruel, some who change with and are changed by the times and their experiences, and some who cling stubbornly to their prejudices while advancing the Union's cause. Dickey brings each of them to life and weaves them together in a fast paced, stylishly written narrative that he has built upon an impressive foundation of historical research.

Good book for all people that enjoy civil war twist. one of biggest mistake people make not enough interest is given to Sherman and his army to the war in the West. this book gives that interest and volunteers that gave to the welfare of soldiers thru the santerary commitees.

COMPLETELY MISLEADING SUBTITLE - NOT ABOUT SHERMAN

If this book promoted itself as promised I wouldn't be upset but I listened to 5 out of 14 hours and it only mentioned GEN. SHERMAN a scant handful of times and even then only a paragraph or two at best! The book is mainly about the POV of female nurses on the outskirts/ margins of battlefields, This is FALSE ADVERTISING. I don't know if it was the author's or publisher's decision to promote it incorrectly. I was expecting somewhat of a biography of Gen. Sherman, the controversial iconic Civil War figure, and his infamous march down South but instead it's merely a meandering sideways story that 's not engaging. I'm trading this into Audible for another title.

This was a wonderfully written civil war book. Fascinating, narrative history of the soldiers, civilians, etc. involved in Sherman's March to the sea. Highly recommended!