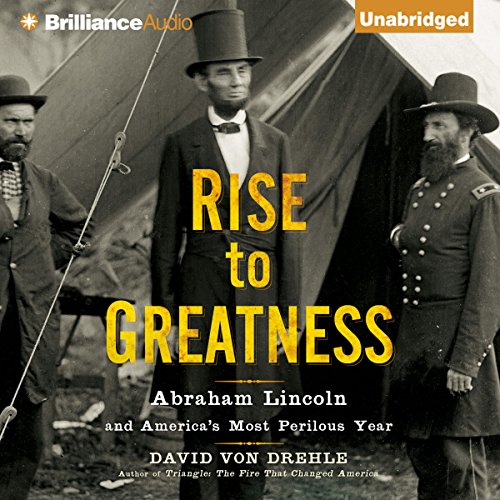 As 1862 dawned, the American republic was at death’s door. The federal government appeared overwhelmed, the U.S. Treasury was broke, and the Union’s top general was gravely ill. The Confederacy - with its booming economy, expert military leadership, and commanding position on the battlefield - had a clear view to victory. To a remarkable extent, the survival of the country depended on the judgment, cunning, and resilience of the unschooled frontier lawyer who had recently been elected president.

Twelve months later, the Civil War had become a cataclysm but the tide had turned. The Union generals who would win the war had at last emerged, and the Confederate army had suffered the key losses that would lead to its doom. The blueprint for modern America - an expanding colossus of industrial and financial might - had been indelibly inked. And the man who brought the nation through its darkest hour, Abraham Lincoln, had signed the Emancipation Proclamation and emerged as a singular leader.

In Rise to Greatness, acclaimed author David Von Drehle has created both a deeply human portrait of America’s greatest president and a rich, dramatic narrative about our most fateful year.

Not often do you get the depth of research about a single year in history. I was impressed by the number of major events that occurred not to mention the weight of many of those events.

This Book Stands Out Among Lincoln Bios

There are of course many books about Lincoln, but this work manages to place itself in the must read category for anyone with a sincere interest in knowing more about the man.

It is more than a collection of facts and observations, but it actually ties the timeline together into a coherent map of Lincoln's own understanding of what was unfolding before him and the nation.

I should add however, that Rockport is not in Illinois, but in Indiana. (The starting point of one of Lincoln's flatboat trips.)

Lincoln in all his glory

Focuses on the torturous last year of Lincoln's fight to end the war and preserve the union. Glosses over his development years and ignores his death. Significant details are given on the emancipation decision as well as faltering attempts to establish separate societies for the races which Lincoln eventually abandoned as a bad idea. Gives great insight into his relationships with his military leaders as he pushed them to close out the war. Grant is discussed as is common but others such as Little Mac and others are brought into focus.