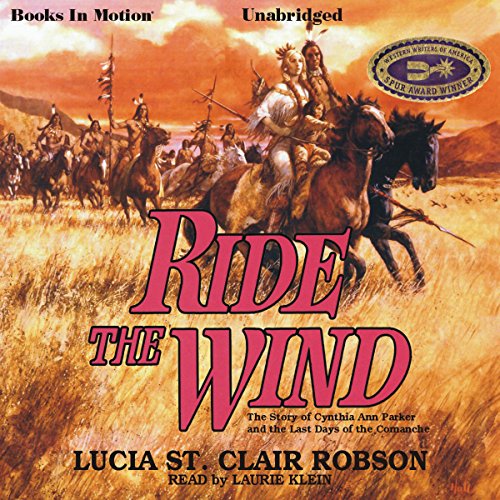 In 1836, when she was nine years old, Cynthia Ann Parker was kidnapped by Comanche Indians. This is the story of how she grew up with them, mastered their ways, married one of their leaders, and became, in every way, a Comanche woman. It is also the story of a proud and innocent people whose lives pulsed with the very heartbeat of the land. It is the story of a way of life that is gone forever.

What listeners say about Ride the Wind

this is a fantastic book,based real people and a true story, it has the ability to make you laugh with joy and cry with the injustice of how wicked the times were.It has an accurate history of the times with some brutal scenes woven through a love story between a white girl the comanche warrior who stole her and her comanche family.the narrator tells the story very well changing seemlessly between yong girl's voices and old comanche men.

Would you listen to Ride the Wind again? Why?

Probably but the story line flowed so well it stays in the mind and I think I would prefer to listen to another book and rely on the very vivid memories of Ride the Wind.

What other book might you compare Ride the Wind to, and why?

To a certain extent it reminded me of Louis L'Amour's early work but this had a very female bias to it. The book works well enough for the adventure seeking reader (more likely to be men) but adds that romance and passion in a very rugged setting. A very well written novel with a Mills & Boon undertone.

Sort of but I thought she struggled with the male characters and sometimes created unfulfilled build ups yet under played the really exciting action (when the two warriors were captured by the cannibal tribe) but still very listenable.

It was a page turner but not all at once it is 29 hours long!

A prequel would be interesting. A time with no white men, a time when the Indians had the place almost to themselves..........a take on the Jean Auel's Earth's Children novels.They are very definitely a female bias but still have a rip roaring adventure story to tell.

nice book but the narrator could be better.

I liked the book but the narrator should not make so many people sould like a cranky old women, even young boy sounded like craky old women. She would have done better to NOT use that voice snd just read the book. The rest of the reading ws good except the Cranky Old Lady Voice she would do distracted from the story. Better book if rerecorded.

Cons:
* The narration: It's way "over the top." No one speaks "normally." Why do some narrators feel that they can't just let the characters speak like humans when they are in human situations? They must ee-nun-seee-ayt like no actual human being ever does. And they emote! I am also finding her range not up to the task (so sort of wish she'd stop trying.) She has mean, hoarse-voiced man; child; adult woman and craggy old-person. I have been listening for six hours and would expect to be able to easily "hear" the various voices by now. Not this time. Because of her overblown, over-pronounced over-acting, I just can't get the rhythm of the narration.

*The plot: So far, there doesn't appear to be one. The story involves (so far; I'm 6 hours into it) several white people kidnapped by Indians. This provides a vehicle for discussing Indian cultures. And that's fine as those parts are somewhat interesting, but I can't help wonder why the story is told from the POV of white people. But even then, there really is no plot to speak of. At least, not so far. Occasionally, something happens. That usually involves some really gruesome, highly detailed violence involving Indians doing horrible things to white people or to one another.

Then they become all "Dances With Wolves" strong and noble, or lovely and romantic and dreamy again.

*The characters are, so far, fairly one-dimensional, but I'm only (only!?) 6 hours into it, so maybe they will take on some depth at some point. Unfortunately, I won't be there to see it as I can't really stand it any more and I'm returning the book.

Or, as the narrator might say, I can't (gasp) reeeeeleee STAND it (sob) any more. AND I (sob) AM re turn ing (voice quavering with tears) THE BOOK!!!

Pros
Learned some interesting things about how the Indians lived on the Plains. Tanning hides was HARD!!

When I first bought this book I didn't realize it was 30 hours. When I saw its length I bought the kindle version as well, thinking that is the only way I would get through it. Laurie Klein did such a great job narrating I ended up listening to most of it throughout the summer while mowing.
Ride the Wind is a great work of Historical Fiction, the author gives life to the time and its people.

Important story but too long

I was glad to have the opportunity to read this important story. It was awfully long though and dragged in parts. I would’ve enjoyed it more if it had received some editorial tightening up before publication. I appreciated the author’s attempt to show the experience and opinions of both the Indian people and the settlers. However, I felt that the descriptions of brutal actions on both sides were overly sensationalized, Which made the story seem less authentic.

If you love Comanches, Texas, or the Old West...

A great story told from a different view. If you enjoy historical reads and/or Native American stories, then do yourself a favor and check this out!

This book keeps me captivated throughout the whole story. I would recommend this to anyone who loves the Indian culture or the wild west or Wagon Train days. Excellent book!

The best audio book I have had.

I read this book a couple years ago. This audio book is great .Narrator wonderful.

I Read It In Stages

RIDE THE WIND is a wonderfully written book read by a narrator so annoying, I could not listen to it for very long at one time. I loved the story and wanted to listen to the book for the very few long stretches of time my job allows, but found it impossible. I kept feeling myself to be in a kindergarten room being read to by an over dramatic kindergarten teacher. Too bad. I can recommend the book for its skillful writing, character development and historical content, but, for me, listening to it was disappointing.

A Great Journey of Love and Life...

This is one of the most emotional books I have come across in a long time. The story pulled me and my heart in. I dont think I have ever cried with both joy and sorrow in any book. This book did help you see what a world of difference there was between the White culture and the Indian culture. It is one book that I will come back to time and time again like a few others I listen to each year. If you liked this book you will also injoy Sara Donati Into the Wilderness Series.

I read this book when I was much younger. I decided to read it once more and really enjoyed the history.