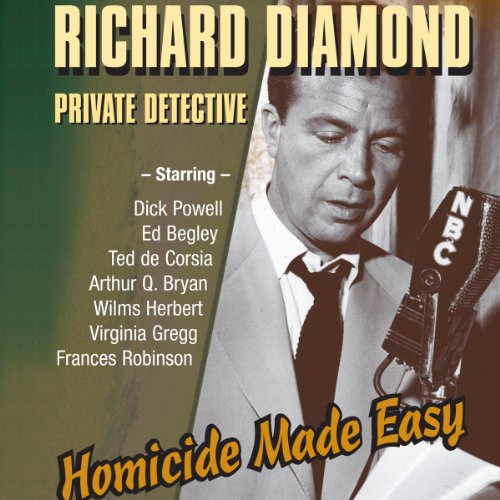 By: Blake Edwards
Narrated by: Dick Powell
Try for £0.00

Richard Diamond, Private Detective was one of the great gems of the last decade of commercial network dramatic radio. Tailor made for star Dick Powell, the sleuth is an amalgam of elements of Philip Marlowe with Powell’s own boy singer past. Diamond is a tough detective and while he often faces long odds and takes his beatings, he always rebounds with humor and style.

This collection includes 16 digitally remastered and restored episodes of Powell starring as the hardboiled “singing” gumshoe mixing it up with thugs, shake-down artists, and murderers in New York City - as well as his former compatriots in the Fifth Precinct, friend Lt. Levinson (alternately played by veteran radio actors Ed Begley, Ted de Corsia, and Arthur Q. Bryan in this set) and nemesis Sergeant Otis as portrayed by Wilms Herbert. Tightly scripted, with strong performances from the series stars and supporting actors, this collection is sure to please enthusiasts of classic radio drama and detective mystery entertainment.

Would you consider the audio edition of Richard Diamond: Private Detective to be better than the print version?

I havent read the print version, but the audio was very good

Short, sweet episodes, with a real 1940's new york feel. I especially like the adverts which have been kept in, probably for prosperity.

If you like old fashioned radio drama then this is the one for you.In short episodes it is ideal and absolutely stereotypical of life in new yor in the early 40's Simple easy listening entertainment. no Brain required!!