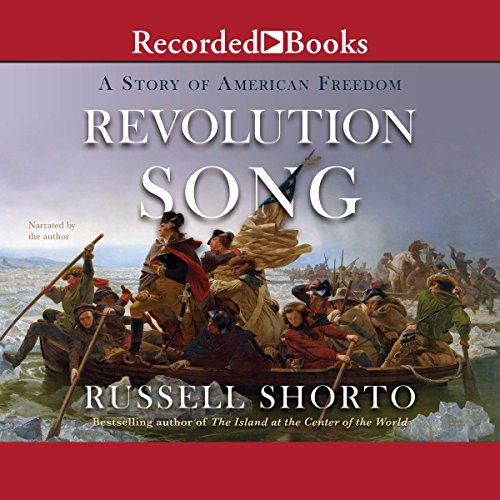 From the author of the acclaimed history The Island at the Center of the World, an intimate new epic of the American Revolution that reinforces its meaning for today. With America's founding principles being debated today as never before, Russell Shorto looks back to the era in which those principles were forged. Drawing on new sources, he weaves the lives of six people into a seamless narrative that casts fresh light on the range of experience in colonial America on the cusp of revolution. While some of the protagonists - a Native American warrior, a British aristocrat, George Washington - play major roles on the field of battle, others - a woman, a slave, and a laborer - struggle no less valiantly to realize freedom for themselves.

Through these lives we understand that the Revolution was, indeed, fought over the meaning of individual freedom, a philosophical idea that became a force for violent change. A powerful narrative and a brilliant defense of American values, Revolution Song makes the compelling case that the American Revolution is still being fought today and that its ideals are worth defending.

An American Saga Only Shorto Can Author

The personal oddysey of the 6 historical figures told within bring the pre-revolution period to life that resonate through the many generations to present-day times.

I was captivated by these interwoven stories and felt truly transported back to revolutionary times.

Outstanding history of the Revolutionary era

Wonderfully conceived as a history through six very different lives. Eloquently read by the author.

I have renewed my interest in our country's history and the way this author put these six individuals lives together was so in lighting.

I was a little concerned about the length of the book, but it was well worth it.

Venture Smith has become my new hero. I actually had tears in my eyes when he went to make an installment on buying his freedom, but the guy just gave him his freedom. Venture took a mountain of lemons and made something quite inspiring. This only served to reinforce my belief that it's never too late to pull yourself up.

Brings struggles for Freedom to life.

The history we were never taught.

A human and personal perspective on the events of America's founding. Educational and insightful. Informative.

Intriguing story that would be better in print

What did you love best about Revolution Song?

That the author stretches out to find both known and unknown lives to tell about.

It reminded me that Americans can always hope to be better.

Which character – as performed by Russell Shorto – was your favorite?

Mr. Shorto gives two especially powerful characters in Cornplanter and Venture. These men lost so much and struggled hard to create decent lives in the face of overwhelming odds.

The only problem I have with this book is the narration. By moving between the characters without a vocal cue of any kind, it became very hard to follow. That's why I intend to buy it in print.