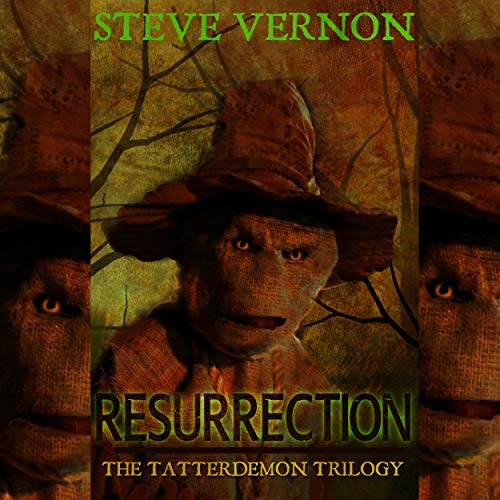 The pot has begun to boil.

In 1691, the town of Crossfall taught the witch Thessaly how to die. They beat her; they shot her; they hung her - but nothing worked. When they finally tried to bury her alive, Thessaly set the field against them. The first man died as a gust of wind harrowed the meat from his bones. A root, flung like a dirty javelin, cut a second man down. Many more deaths followed. The Preacher Fell impaled the witch upon her very own broom, but she dragged him down into the field to wait for three more centuries.

Three hundred years later, Maddy Harker will murder her bullying husband Vic. She will bury him in the field where she buried her abusive father years before that - the very same field where the revenant spirit of Thessaly Cross lies waiting.

In three days, Vic will rise again - a thing of dirt, bone, and hatred. Men will call him the Tatterdemon. And hell - and Thessaly - will follow.

This is the second book of the creepiest scarecrow novel you will ever hear.

What listeners say about Resurrection

It didn't get better in book 2

See my review of the first book, all the same applies.

The characters are no better, the descriptions just as bad and the story takes a while to get going.

Sorry but this series just isn't grabbing me.

I am assuming that you are here because you read Book one and couldn't get enough. Understandable. Just in case you haven't read book one you needn't worry, I think that you can listen to this book and understand everything that is going on without issue. In case you are wondering, I am a huge fan of Steve Vernon AND Rick Gregory, and so wouldn't have missed this for the world. I think, that as we go into this you will find yourself becoming a fan of them as well.

The premise is that a witch laid out a curse three hundred years before, and when the conditions were just right a totem of her revenge erupted from the ground and went on a nice little killing spree. We pick up pretty much where we need to, and the story hasn't slown down at all. There are still people what need killin' and the Tatterdemon is just the revenant to handle things. Just an FYI, a Revanent is a restless spirit that returns from the grave seeking justice against those who wronged it. Think of Brandon Lee as the Crow and you'll get the idea. Our boy, the tatterdemon, aint quite as pretty as Lee, nor is he as gentle. Nothing like a bundle of shredded rags and bones ripping a person apart to keep you cool on a Sunday! I cannot wait to see how this story ends. I'm actually rooting for the bad guys here!

Gregory performs this reading like he was living the story, he fills your ears with every ounce of malice the monster has, and makes you empathize with those the tatterdemon stalks (well, I didn't, I wanted to see how he killed them; that is why you read books like this after all but the effort was appreciated). He plays this book like a finely tuned fiddle, and you will, without question, enjoy listening to him.

I eagerly await the next and final phase in this series. Don't miss out, listen up and listen in to these books. Even though I did receive a promo code for this review it in no way influenced my considerations of the material, and in fact, inspired me to be more honest. Getting a code generally makes me harsher as a reviewer as I am more often concerned what someone like Me will decide based on my review.

If you thought that the first book in this trilogy was a messed up story, just you listen to book number two. This one takes the already twisted stories of Crossfall’s residents and ramps it up the crazy like a drunk ex. This story continues were the last one left off and really needs to be read in order. You will lose the background of why things are the way they are. Just like the first book I really enjoy the writing. The humor and horror are perfectly blended to create a unique and bizarre town that I enjoy visiting in these stories.

Since the first book really laid out the characters this one really starts to advance the plot. And it is a twisted plot indeed. Maddy still takes center stage and trades one deadbeat for another. She just can’t get a break. The story starts out with a new character and I absolutely loved her backstory and really can’t single out a character I don’t want to have a drink with. Everyone in the town has issues and their stories are really amazing. I don't know how Vernon packs so much detail and story into such a short book.

So far my favorite resident is Marvin the mailman. I feel like he uses his postal outfit as a costume to hide his dark side. I have to admit, I really thought it was funny when he was filling envelopes for Maddy to give her what he intended to earlier. Such a twisted guy who goes about feeling superior to all the other residents but is really just as depraved as they are.

These types of stories must be written with Rick Gregory’s voice in mind. He voices these stories perfectly and provides the right amount of grittiness for the characters. There isn’t another narrator I think can voice this one better.

Having thoroughly enjoyed book 1, I couldn't wait to listen to this. This one was just as good. The whole story is starting to come together and I can only imagine what is coming next!! The authors descriptive writing is great and he made it really easy to get into the story.

Even with it only being about 2 and a half hours long, the author once again seems to pack so much into it. I do hope this will become available as an omnibus because I'd love to read the whole story uninterrupted.

Rick Gregory read this perfectly. He was able to bring life to the characters and brought the atmosphere to life too.

More over the top than the first book

'Resurrection', Book 2 of Steve Vernon's Tatterdemon Trilogy picks up where Book 1 ended and proceeds to be even more shocking and over the top ever. Rick Gregory continues to deliver a solid performance, even though the dialogue is still lacking and the metaphors are as thick as flies on a zombie circus clown covered in cotton candy. If you enjoyed Book 1, then you'll enjoy the continuing story. I just don't recommend listening while you eat.

I received a copy of this audiobook in exchange for an honest review.

The first book had some rough parts, but the author seems to have hit his stride with the second.

Can't wait to hear what happens next! Not a stand-alone book, you definitely need to listen to the first one beforehand. But this series is well-worth the time.

Read the first excited for the sequel

This book is mostly standalone but you’ll get more out of it if you read the first one too. If you’re in to horror or want to get in to the mood for Halloween this is a good book for you!

As I said before with book one, this is not for those who are faint of heart. Not to sound repetative of other reviews, that is just the phrase I will use for books or movies that may be a little to graphic or grisly for some. As I also stated with the first book in the series, I actually like the grisly books, so this is right up my alley for the most parts. It does have quite a bit of language, and I am not crazy over that, because I feel like there are times when it is not required. That would be where I deducted a star. I am far from a prude when it comes to my music, movies, and books, but sometimes enough is enough. Less is more. The scenes for the deaths are put out there in detail, and that could be a turn off for some readers, so please be warned before just jumping in. This is a not an novel that is too long, it is a quick read for most readers, and you can happily read it in one sitting. If you like horror and can handle the graphic nature and language, be sure to grab this one up! You will be happy you did.

I was lucky enough to read a copy of this, and would like to thank the author and publisher for allowing me to be able to read on kindle and listen on audio. I think it really adds to the story to be able to hear the narrator bring it to life in even more detail in your mind.

300 years after a witch curses a family,the whole town seems to be harboring bodies.Maddy is seeing ghosts and then Vic rolls over in his grave,kind of.Rick Gregory is the perfect,droll narrator for this series.I was given this book by the narrator,author or publisher free for an honest review.

This is the second book in the Tatterdemon Trilogy. I suggest listening to book 1 first. This does need to be listened to in order! Excellent horror story so far! Can't wait to see how the story wraps up in book 3. Love the narration by Rick Gregory!