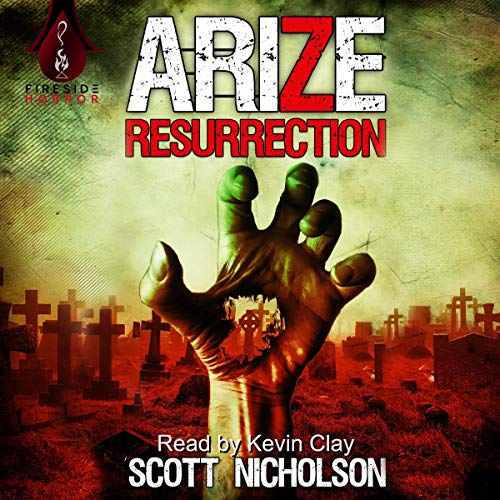 By: Scott Nicholson
Narrated by: Kevin Clay
Try for £0.00

"One of the most thrilling writers working today. Miss him at your peril." (Blake Crouch, Wayward Pines)

It begins with a long-dormant virus released from an archaeological dig in Northern Alaska.

A researcher studying the virus suffers a fever and launches into a bloody killing spree that ends with two police officers dead. A second researcher, Dr. Meg Perriman, has just flown home for the Easter holiday with her family in North Carolina, unknowingly carrying the virus. Within days, the infection spreads across the planet, sparking martial law, chaos, and widespread slaughter as many of the infected turn into flesh-eating zombies.

Meg and a few others appear to be immune, however, and the survivors gather in a megachurch called Promiseland that the US government has established as an emergency shelter. The Rev. Cameron Ingram, a charismatic televangelist the president has appointed as the “zombie czar”, believes the catastrophe is a sign of the Biblical apocalypse. When a rash of natural disasters accompany the outbreak and civilization breaks down, people turn to Ingram for salvation in the face of fear and despair.

But Meg and her group of friends soon discover Ingram is not what he appears, and they are caught between the devil and the living dead.

Scott Nicholson is the international bestselling author of more than 30 thrillers, including The Home, McFall, Liquid Fear, Speed Dating with the Dead, and the After and Next post-apocalyptic series. His books have appeared in the Kindle Top 100 more than a dozen times in five different countries. Look for Arize, Book 2: Revelation.

What listeners say about Resurrection: A Post-Apocalyptic Zombie Thriller

I really liked the story and the brilliant narration of Kevin Clay, makes one enjoy the quality of this book even more.
Thank you
Regards
Sebastian

I really enjoyed Scott Nicholson's twist on this post-apocalyptic story, biblical 'end of days' versus science, and the underlying corruption and conspiracy. The start was a bit slow, but soon became fast paced and action packed, with some chilling events. The characters were interesting, some more enjoyable than others, and the narration by Kevin Clay was good. I can't wait for the next book to be available on audible to find out what happens next. I received this book in exchange for my honest review.

Too much focus on politics

I don't mind politics in books or hearing characters political beliefs, but this is a zombie book. Why would I care if one zombie is a republican or not. Too many times a character said, "shoot for the head", and a missed opportunity to write about how the zombie virus spread and how chaos overtook the nation. You get one single chapter that skims over how the world fell apart. Instead of breaking it down into chapters and elaborating on how it affected the characters or daily life, you get a single chapter explaining all of this. Not a bad book, but if you want a good zombie book, read Toy Soldiers, or Apocalypse Crusade. Hell, read the Zulu Virus. All of these books are significantly better.

As if a zombie apocalypse wasn't enough, imagine the country being run by a delusional, megalomaniac reverend!

A long dormant virus is released from the colds of Alaska and travels out as those in the research party go home and travel on breaks. One of the researchers suffers a fever than goes on a killing spree, as another felt like she had the flu for a couple of days but recovers. Within days the virus is everywhere and many many people are dying and infecting others, chaos is rampant and the military is trying to help along with a mega church minister who is prospering from it.

This is a good book if not a bit close to home at the moment. The narrator Kevin Clay does a wonderful job making you feel as though you are there and going through all of this with Dr. Perriman and her family. This is a refreshing look at zombies.

Typical Zombie story, great back story and character building. lost me when it got "preachy" would've been amazing without the bible verses and sermons. The ending got to muddled with too many "disasters" thrown in. Maybe it'll all work out if there is another book, but it didn't quite work.

Yet another author who can't seem to keep their politics to themselves. Its a zombie book, I read these books to get distracted from current events. The first few chapters contain veiled jabs at the then president, and a commentary on the plight of the undocumented worker. None of these topics add to the story, would have been better spent writing about the spread of the virus. I stopped reading at the point where a neighbor was described as someone who flies the American Flag, is pro 2nd Amendment and a prepper. Apparently according to the author, flying the US flag is for the unsophisticated.

...Its ok, this, that & some of those, something old, something new, sumtink //redacted//, something blue...its ok.

If you every saw the Left Behind series from early 2000s will now we know what would've happened if it was done during 2020. The story was nothing new to the zomvie genre do I was glad you called them zombies and gave an explanation for the virus origin. Do I did not like how alot of chacthers had to be kept informing them that head wounds to kill zombies was just idiotic to have so many dumb chacthers who can't follow one rule.

Amazing listen for Friday the 13th

Welcome to the pandemic. It feels a bit too real thanks to the current circumstances.

Scott weaves a tale that leaves me wanting more, and is able to craft his story in ways that keep me engaged all the way through.

Kevin Clay does a solid job and I really want the next books in the series now! His tone really brings you into the desperation of the world around.