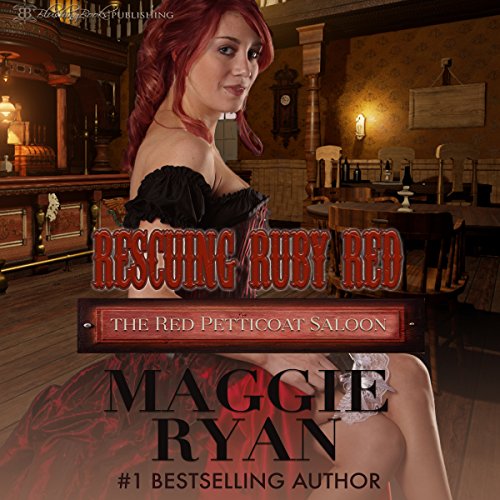 By: Maggie Ryan
Narrated by: Sophia Chambers
Try for £0.00

From the moment Rebekah McTavish meets the beautiful, cultured Madame Jewel, she has but one dream. She wanted nothing more than to get a job at The Red Petticoat Saloon and don the coveted red petticoat worn by Jewel's gems. She discovers that getting hired is the easy part - who knew that Jewel's partner has a tendency to frown upon gems who break the rules.

Jebidiah Justice spent much of his youth avoiding the little red-head. Even his constant threats to tan her hide did nothing to sway the little pest to better behavior. Now, as the sheriff of Culpepper Cove, avoidance is no longer possible. On the night he catches her red-handed breaking and entering, he has to make a choice. Can he force himself to arrest the girl he remembers or will he lose his heart in rescuing the woman she's become?

Rebekah becomes Ruby, the newest gem at the saloon, finding a home and a sense of family she craves. The only thing standing between her and her red petticoat is a man who refuses to call her anything but Red and warns her that if she puts so much as a pinky toe on those stairs, the only red thing under her skirts will be the hue he paints across her backside. And, this time, she had a feeling that he isn't just threatening.

Will the two leave the past behind and make a future together or will their chance of happiness be taken away?

I have read the other books in the series and this one was only available through Audible. This was my second audible book. Sophia Chambers was excellent! I enjoyed the storyline and the characters.