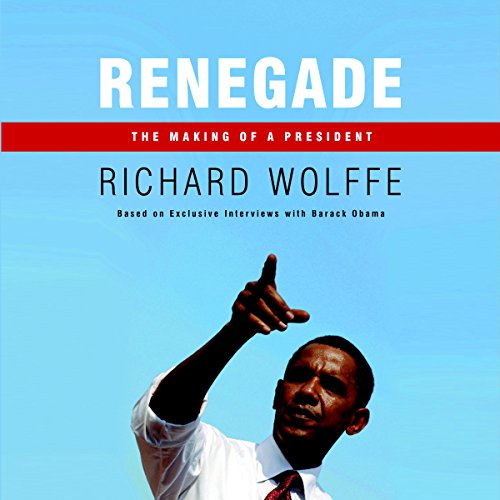 The Making of a President
By: Richard Wolffe
Narrated by: Arthur Morey
Length: 15 hrs and 49 mins
Categories: Biographies & Memoirs, Political Figures
4 out of 5 stars 4.0 (7 ratings)

Before the White House and Air Force One, before the TV ads and the enormous rallies, there was the real Barack Obama: a man wrestling with the momentous decision to run for the presidency, feeling torn about leaving behind a young family, and figuring out how to win the biggest prize in politics.

This book is the previously untold and epic story of how a political newcomer with no money and an alien name grew into the world's most powerful leader. But it is also a uniquely intimate portrait of the person behind the iconic posters and the Secret Service code name Renegade.

Drawing on a dozen unplugged interviews with the candidate and president, as well as 21 months covering his campaign as it traveled from coast to coast, Richard Wolffe answers the simple yet enduring question about Barack Obama: Who is he?

Based on Wolffeï¿¿ï¿¿ï¿¿s unprecedented access to Obama, Renegade reveals the making of a president, both on the campaign trail and before he ran for high office. It explains how the politician who emerged in an extraordinary election learned the personal and political skills to succeed during his youth and early career. With cool self-discipline, calculated risk taking, and simple storytelling, Obama developed the strategies he would need to survive the onslaught of the Clintons and John McCain, and build a multimillion-dollar machine to win a historic contest.Renegade is an essential guide to understanding President Barack Obama and his trusted inner circle of aides and friends. It is also a riveting and enlightening first draft of history and political psychology.

"The first of the President Obama books - and a good one - insightful, thorough, and straight." (Ben Bradlee, Washington Post)
"A superb achievement....Richard Wolffe's Renegade tells the hidden, dramatic story of the 2008 campaign and also reveals much we did not know about the 44th president's life before politics. (Michael Beschloss)
I learned something new on practically every page." (Gwen Ifill)

The best thing about this book is it gives some idea on how the Obama mania caught fire. It describes how the campaign started, what it's strategy was (focus on Iowa), how he got fundraising (from Sheraton hotel owner family), and insights in behind the scenes of the campaign. The author was a reporter attached to the Obama campaign from when Obama first started his Presidential campaign.The terrible thing about the book is that the author is an Obama sympathiser, trying to brush or smoothen over many Obama flaws/falsehood e.g. executive with tax problems and from failing bank Timothy Geithner put in charge of the treasury and Obama originally faovurable to public finance for campaigning, when nominee refused and got money from the special interest - ie the bankers who caused the collapse who he gave money in the bailout and did not arrest. The author very rarely takes a critical view of the subject, making this a boring yawn of a book.

Would you recommend Renegade to your friends? Why or why not?

Not to my friends. I would recommend David Mariness Obama book, which is available on CD on Amazon - it gives more insight to the personality of Obama. Audible needs to get this.I have read many books on Obama - this is probably the weakest. Its just a book of quotes of Obama speeches, with some insight into the campaign, done in a positive spin by an Obama Sympathiser.

What aspect of Arthur Morey’s performance might you have changed?

Not the narrator's fault, but unfortunately the author of the book often quotes large segments of Obama rhetoric and speech, and the narrator does a terrible job of delivering quotes of speeches, mostly because he does not have Obama's voice. I suspected the author did this to increase the pages of his book, rather than present interesting insights and arguments, to add to the conversation about Obama.

Could you see Renegade being made into a movie or a TV series? Who would the stars be?

renegade 1 : a deserter from one faith, cause, or allegiance to another 2 : an individual who rejects lawful or conventional behaviorNote neither the contation of renegade is positive. First, I got this book in 2009/2010 very early on in its release on Audible. I have just finished it in March 2017, although to be fair I re-listened since Jan 2017 - but it was so bad and boring that it felt very difficult at times to listen, due to the overall quotes of Obama speeches, and so pro-Obama, that the author admits it.In the epilogue at the end, the author admits that Obama was the one who told him to do a book, about the campaign, Obama even suckered him into it, noting that the author and him were similar as they were both mixed races - Obama - had black and white parents, the author of this book was from England and Morocco. After this charm offence, the author agreed to do it, and hence you have what you hold in your hands today - a biased uninteresting non-critical view of Obama. If I had known this at the beginning I would not have bought this book.The author is a rich upper class background - he went to an extremely expensive school in England, and then went to Oxford. He is from Britain, as a result, he cannot understand deeply the complexities of American issues, nor empathise with the American situation. He is lovestruck like many foreigners and Americans, with the Obama campaign during the time it ran. Wolffe is a "writer", not an "author". A writer often produces work which is often not compelling to the audience, but maybe only to the writer, and his small band of Merry men. A writer establishes events in his subject history, and quotes his subject, but does not give enough meaning to them. An author knows his audience, how to make it interesting to his audience, highlights drama, intrique and criticiques, defends, and tries to get a better understanding of his subject. An author who does this extremely well is David Mariness - First in His Class (on Bill Clinton) and Obama. Although people may have bought this book, due to the Obama intrique, I suspect many may have left it after a few chapters gathering dust on the shelves. Positive include some highlights behind the scenes of the campaign, and how a campaign is run. I will suggest if you are interested in becoming a politician, and need to learn how to set up a campaign and run, this would be interesting.Books on Obama I have read or listened to:1. Dreams from my father = Autobiography, with characters either made up or amalgamated. 2. David Mariness Obama - Best book out there. Obama from his grandfather to just before Harvard3. Obama by Mendel - Great book written by reporter from Chicago newspaper. Obama from childhood to university.4. This book5. Audacity of Hope - written just after Obama became senator. This book is in last place, in summary, just do the excessive writing to add more pages in the book will appear.

Insights into the greatest Presidential Campaign

Having followed the 2008 Presidential Campaign live, I found Renegade riveting from the first word to the last. The book provided depth, insight and perspective to the events of the prolonged 2008 campaign that I had superficially followed in the news and internet and TV. It brought back the excitement and competitiveness of the democratic nomination and the presidential campaign. The audio reader captivated my attention in revisiting the characters and plot for the run up to the presidency; Obama, Biden, Clinton, McCain, Palin and others. This audiobook Renegade has earned a favorite place on my iPod.

Full disclosure: I am a Progressive and I supported Obama in the presidential campaign and I continue to support him. That being said, this book was wonderful to listen to, a fantastic book that was written very well and read like a good novel! It held my interest right through from beginning to end, and I am well-informed to begin with. The narratation was outstanding. Overall, I had a very positive experience with it!

I don't always know what to expect with these types of books, but "Renegade" is first rate.

Richard Wolffe's access to the Obama inner circle from the earliest days of the Iowa campaign combines with his great talent as a journalist and storyteller to make for a great read. His research and writing contributes to our knowledge of the new President in a very entertaining way. The narration was excellent as well. Good book, good production!

Inside story of an historic election

Wolfe does an excellent job capturing the mood of the campaign, from unrestrained optimism to crushing doubt. This election will become transformitive in American history once we have time to gain a better perspective. The only critism of this excellent book is that it jumps back and forth to Iowa. It seemed like every time a turning point is reached, somehow we're back in Iowa. Overall, a tremendous book.

Great insight into President Obama, his campaign staff, and his journey to the White House.

sadly superficial and illed with cliches

This long anticipated book sadly fails to capture the complexity of this fatherless hawaiian boy (I knew his father who was nothing like he is described by Neil abercrombie, Hawaii's Congressman).

Wolfe in no way captures barac's exceptional intellect and his capacity to grasp deep psychological truths about the people he deals with and the conditions he encounters.

Nothing in ths account explains how he assembled this amazingly competent team and seamlesslessly mouled them into an amazing fighting machine, and his power to inspire submission and loyalty among this team of towering egos
Nothing here has not been peviously published in the national media.
The story remains to be told