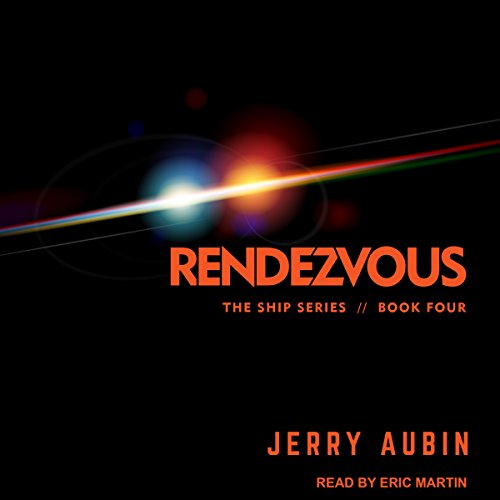 Adan is ready to leave Earth behind. He successfully transformed his massive asteroid into an amazing spaceship, but faces an even larger challenge as he tries to negotiate the repercussions of the many deals and compromises that were required along the way. The choices he makes will not only impact those people who remain behind, but will also determine how the society onboard his vessel survives far into the future.

Five thousand years after it first left Earth, the Ship is racing back in search of the mysterious humans its Crew has battled repeatedly. The Flight Boss is navigating an uneasy partnership with the civilian president as the Ship's condition degrades rapidly, but puts his trust in Kalare to prepare their pilots for one final battle to reclaim humanity's homeworld.

What listeners say about Rendezvous

A story that fits nicely into the world of sci fi

Thanks to my lovely Erika Mages, I have finally ( although with a sense of literary bereavement) finished The Ship Series by Jerry Aubin. This being my first soiree into the world of audible books, after being transfixed by 5 increasingly addictive instalments, I can only hope this great author has both the time and inclination to delve even deeper into releasing more sci fi books, and I look forward to hearing Eric Martin, slowly but surely, this narrator became an endearing part of my haphazard journey back into Science Fiction

Disappointing. Good, but tiresome at the same time

12 years have passed since Zax was put into stasis, and his brain still hasn't thawed out - while all the other characters have had 12 years in which to develop and mature, Zax still has the maturity and intelligence of a petulant 10 year old. He has constant opportunities to show initiative and take positive action but consciously shies away from them, preferring to stand there mouth agape in stunned silence, and then wonders why things are going badly for him.

The good points are that the book continues the previous tactic of letting us into the heads of other characters, and much of it is dedicated to Aiden and the creation of The Ship - which is really interesting and well written, and Martin reads it well.

But, to reiterate - too much is left unexplained. It's difficult to be specific without creating a big list of spoilers, but simply put - don't expect to know what's going on at the end of the book because you won't. If you've got this far you actually feel a bit cheated - presumably Aubin will write another book at some point in the future, and because you've got this far you might as well carry on.

Still a great book but it's become a little predictable over this and the previous book.

I highly recommend this series, including the last installment, Rendezvous, which I just completed. The characters are well fleshed out, and even though the story is taking place thousands of years in the future, still very relatable. Despite the futuristic time frame, this story and these characters could be contemporaneous or even set five hundred years in the past. The vagaries of the human condition are not subject to an epoch, and the author does a brilliant job of subtly, and at times not so subtly, elucidating that uncomfortable fact. The talent that read the book was also spot on, I have returned audio books because of poor recitation of the material and this was smooth and easy to fall into the story with.
Regards,
Sam Thompson

Open ended. with plenty room for another fantastic epidode. Can't wait, for the next book!