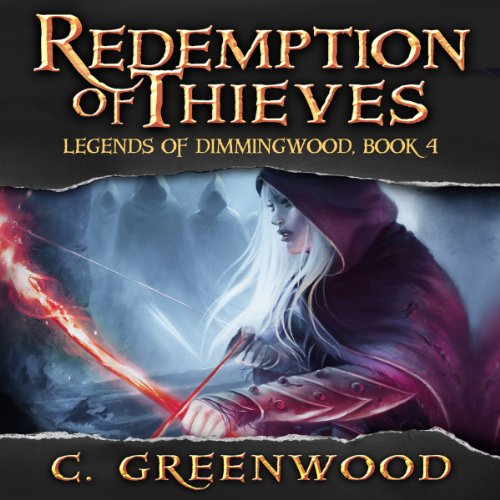 Compelled to join forces with her life-long enemy, the Praetor, Ilan sets out to defend her friends in Dimmingwood from the murderous raiders across the border. But when Ilan, Terrac, and the Fists in their command enter Skeltai territory through a magic portal, they find themselves in more danger than they bargained for. Their only hope of returning home alive may lie in sacrificing the thing Ilan values most - her enchanted bow. As Ilan works to save her companions, she grapples with newfound feelings for an old friend and uncovers an unexpected truth about her origins. Will the answers she has worked so long to discover prove to be her final undoing?

bad sign when you want them to kill off the main character?

no, she's really annoying, not terribly bright and makes same mistakes over and over. But the whole series is quite readable/listenable for all that. reader can be a tad slow, I sped it up slightly, felt like it was dragging along.

What disappointed you about Redemption of Thieves?

When I started reading this series it seemed to be well written, and the characters were likable. The main character was intelligent and savvy and I found myself intrigued by her. The third book was the start of the slide into silliness. Unfortunately by the time I started listening to this book the main character had suddenly lost her wits, and started acting like an idiot. If the characters had remained the way they had been in the first two books this might have been a very good series. Sadly that is not the case.

Has Redemption of Thieves put you off other books in this genre?

No. This book is not sufficient to put me off the fantasy genre. There are simply too many excellent books in this genre to allow this one to sway me away from my love for fantasy.

Would you be willing to try another one of Ashley Arnold’s performances?

While this was by no means the worst narration I have heard, it was also not the best. Too many mispronunciations, and awkward pauses. There would need to be a story I really wanted to hear for me to try another narration by Ms Arnold, and no other alternative.

If you could play editor, what scene or scenes would you have cut from Redemption of Thieves?

I do not claim to have the kind of expertise needed to edit a book, and so will leave that to those who hopefully know what they're doing.

In the first two books I really liked the main character, but by the third and fourth she was acting like a spoiled, and foolish child

Enjoyed these greatly although short books

I have been trying to read more fantasy books something that is unusual for me. I really enjoyed these but thought they were short and the series could have been compressed into one novel. Also a lot of repeat information i suppose it is so people who do not start at book one can catch up on what they missed.