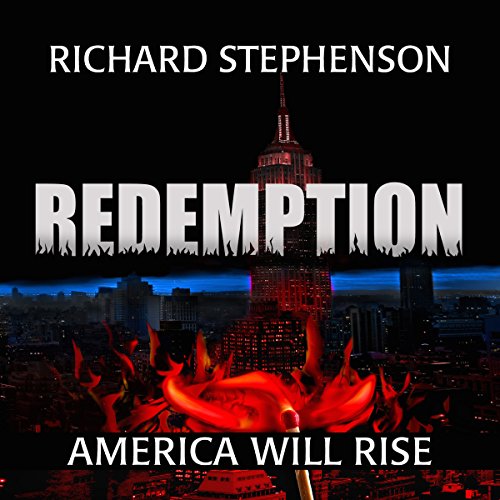 Eleven years after the collapse of 2027, the former United States is a shell of its former glory. Four years of war with the Chinese have left the once-great nation in shambles and dissolved the Pacific States of America, the last beacon of hope and the legacy of the its founder, Howard Beck.

The only hope for restoring civilization rests in the hands of Richard Dupree and Maxwell Harris. The two men must overcome their differences and fight their way across a lawless, desolate landscape to face an adversary that will stop at nothing to rebuild society for his own evil gain.

What listeners say about Redemption

I loved the series but this book felt incomplete. I felt there was alot missing from the storyline.

Barely even the same story

$13 for one third the size of the first book with a rushed plot that barely follows the arc set in the prior two novels.

There is no resolution. There barely is any mention of Marshall Beck or the events immediately following book two. This felt like Richard trying to cash in on writing a book to fill a quota with no interest in his characters' progression.

The narration was bland and boring. The narrator of the prior two books was far better.

I want my money back. This trash wasn't worth the cost. Richard should be ashamed.

What disappointed you about Redemption?

It started years after the last book ended, something happened to change the characters relationships, but we don't know what. Then just when it seams like some explanation is going to happen we jump to a different time and have to try and figure out what is going on all over again. Then ending just over all stinks!

What could Richard Stephenson have done to make this a more enjoyable book for you?

Wrote a complete book! Book 1 was 17 hours and spent so much time in development of the characters. Book 2 was a little over 9 hours, was disappointing, but at least made some attempt at keeping things going. This 3rd Book at 6 hours felt like an incomplete work. There was no effort made to keep with the care and detail used in the first book. It felt like he no longer cared, and was told to turn in what was written to meet a deadline.

Who would you have cast as narrator instead of Jeff Zinn?

For the sake of consistency I would preferred David Gilmore who read the first two books. In reality I don't feel that either narrator was all that great. My opinion of Mr. Zinn may be tainted by the inconsistent story and unhappiness with the author's writing.

Disbelief that a series that started with such promise went into a downward spiral and ended with no resolution.

Not satisfying at all... feels like half a book

I felt like I only got half of a book! Although the prior two books in this series were not my favorite, they were solid. I was suspicious at first when I saw that this book was only 5 hours long, but was committed to buying it since I wanted to know how the story ended. I should have listened to my gut.

This book starts out several years in the future with our heroes Harris and Dupree basically hunting each other for some unknown falling out they had. Then, just as it starts to get interesting, we are taken back to the past to find out why they are no longer friends. Then, just as that starts to get interesting, the book ends! What happened? I feel like the publisher must have told the author he had to turn in whatever he had, like being forced to put your pencil down at the end of an exam, before you are finished. Very disappointing.

But, I guess it worked, because I am going to buy Book 4 now (probably in a couple years) because I still want to know what happened.

This must be a fill-in-the blank sequel. A little disappointing where is the next book?