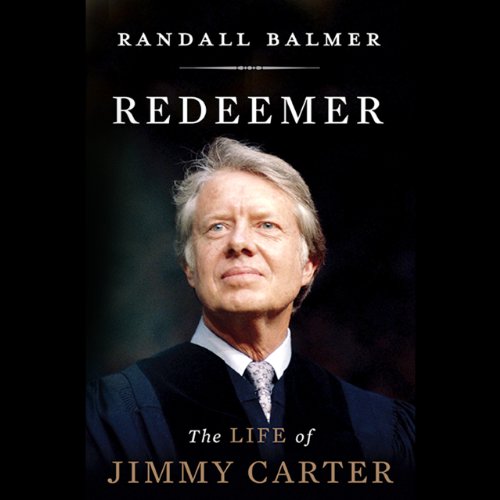 Evangelical Christianity and conservative politics are today seen as inseparable. But when Jimmy Carter, a Democrat and a born-again Christian, won the presidency in 1976, he owed his victory in part to American evangelicals, who responded to his open religiosity and his rejection of the moral bankruptcy of the Nixon Administration. Carter, running as a representative of the New South, articulated a progressive strand of American Christianity that championed liberal ideals, racial equality, and social justice - one that has almost been forgotten since.

In Redeemer, acclaimed religious historian Randall Balmer reveals how the rise and fall of Jimmy Carter’s political fortunes mirrored the transformation of American religious politics. From his beginnings as a humble peanut farmer to the galvanizing politician who rode a reenergized religious movement into the White House, Carter’s life and career mark him as the last great figure in America’s long and venerable history of progressive evangelicalism.

Although he stumbled early in his career - courting segregationists during his second campaign for Georgia governor - Carter’s run for president marked a return to the progressive principles of his faith and helped reenergize the evangelical movement. Responding to his message of racial justice, women’s rights, and concern for the plight of the poor, evangelicals across the country helped propel Carter to office. Yet four years later, those very same voters abandoned him for Ronald Reagan and the Republican Party. Carter’s defeat signaled the eclipse of progressive evangelicalism and the rise of the Religious Right, which popularized a dramatically different understanding of the faith, one rooted in nationalism, individualism, and free-market capitalism.

An illuminating biography of our 39th president, Redeemer presents Jimmy Carter as the last great standard-bearer of an important strand of American Christianity, and provides an original and riveting account of the moments that transformed our political landscape in the 1970s and 1980s.

What listeners say about Redeemer

Redeemer by Randall Balmer is a biography of Jimmy Carter from childhood to receiving the Nobel Peace Prize. Balmer is a professor of American Religious History at Dartmouth University. Balmer appears to be reasonably adjective and unsentimental about Carters record as President. Balmer treats the details of Carter’s life succinctly and fairly. Balmer said Carter appointed an unprecedented number of women and minorities to his administration. The author points out that Carter was the only President in modern time that did not send troops into war. Balmer says Carter’s greatest success in the White House was the Camp David accords; bringing peace between Israel and Egypt. The author articulates Carter’s religious beliefs throughout the book. He states Carter followed the 19th Century progressive evangelist who interpreted the prophetic call for justice as a mandate for racial reconciliation and gender equality. The author contrasts this to the modern day evangelist who have become extremely conservative and in most ways the opposite of the 19th century viewpoint. Balmer points out toward the end of the book that Carter left the Southern Baptist Church over this difference in basic philosophy.
Carter brought religion into the national government more directly and intensely than any President before him in the 20th century. Balmer sees this as a redemptive response to the cynicism and venality of the Nixon years, and unquestionably there is some truth to that viewpoint. Balmer does indicate that Carter was his own worst enemy: self-righteous, humorless, and haughtily and aloof. Balmer says Carter never understood how to talk to the American people illustrated by his July 1979 address to the nation “Crisis of Confidence” speech. Balmer sets himself a clear task in the biography: to examine how faith influences the career of a man and to explain when an evangelical President fell out of step with voters so that a divorced Hollywood actor handily defeated him four years later. He fulfilled his task in an interesting an easily readable manner.
Balmer says Carter has done his best work since he left the Presidency, under the aegis of the Carter Center he and Rosalynn have become world-renowned humanitarians and fighters for women rights. He won the Nobel Peace Prize in 2002. James Lurie did a good job narrating the book.

A great introduction to progressive evangelicalism

What made the experience of listening to Redeemer the most enjoyable?

Narration was excellent; perfectly paced. Balmer, an evangelical himself, has such authority in writing about evangelicals.

Well written, thoughtful, explanatory, clear, enlightening, and well performed. What more could a listener ask for?

Interesting bio of one of the more maligned Presidents of recent history. Balmer offers a sympathetic portrait of Carter, drawing attention to his multitude of achievements while underscoring well known on the record failings. For any Carter detractors, this book won't likely make them fans but hopefully would at least ameliorate the exaggerated negativity which has come to characterize the Carter presidency. As a bio, I would rate this only so so - it is really about a ten thousand foot overview of the man and his presidency - I would have preferred more depth and detail. What makes this compelling however is Balmer's assertion that the rise of Carter paralleled the rise of the Evangelical voting block, something from which he initially benefitted before they abandoned him. I found this pretty persuasive. On this basis, I found it well worth the read, but will still seek out a more comprehensive and definitive Carter bio at some later point.

No complaints here. Enjoyed the narration.

This book is a very interesting and informative book. Great bio on Jimmy Carter and extremely informative info on the rise of the evangelical voter and preachers and politicians who have maneuvered that vote in my opinion to the detriment of the country and Christianity in the US.

This biography is well done and covers Carter's childhood through post presidency but it is entirely focused around religion. I don't think any story of Carter could be told without involving religion but this biography approaches everything from a religious standpoint. If it didn't have a religious angle it was glossed over or not discussed. It does cover the rise of the religious right and their influence in politics which was interesting, but don't expect any broad political picture or in depth policy history.

The author obviously supports most of Carter's views, and he has elsewhere lamented the rise of the religious right, which is documented herein. Nevertheless, this work is revealing and well-written. While concentrating largely on the ill-fated presidency, we do get a good picture of Carter as a man.

What other book might you compare Redeemer to and why?

Any of Jimmy Carter's books that he read himself.

He pronounced Rosalynn's name as ROZALIND. I am so disappointed. I have met and visited with Mrs. Carter. Her name starts with ROSE.

What character would you cut from Redeemer?

I am going to have to stop listening to this book and will switch to the Kindle version.