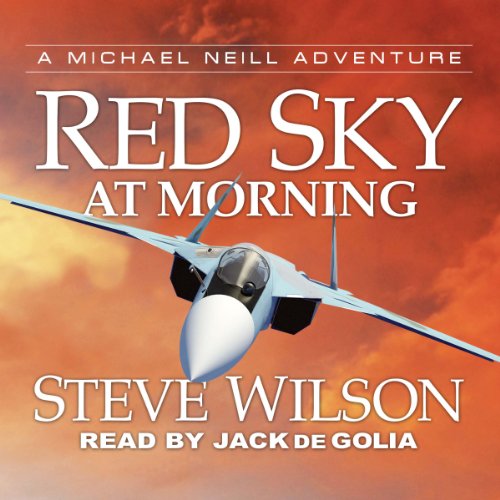 By: Steve Wilson
Narrated by: Jack de Golia
Try for £0.00

When Marine Lieutenant Michael Neill is ordered to the former Soviet Union, his assignment is to verify nuclear disarmament. But before his mission begins, an American reconnaissance plane is attacked by a Russian fighter, and a Navy pilot is killed. After the incident, Neill's mission changes.

Willis Avery, the President's National Security Advisor, wants Lieutenant Neill to investigate Russian stealth technology, in addition to his original assignment. Photographic evidence - and the lack of radar images of the attacking aircraft - lead the American intelligence community to conclude that something new has been developed in the skies over Russia. Avery believes that Neill's friendship with a high-ranking officer in the Ukrainian Air Force is the key to establishing Red Sky at Morning - the existence of new aviation technology that could upset the balance of power between East and West.

However, ultra-nationalist forces are at work. After arriving in Eastern Europe, Neill quickly uncovers a conspiracy of terrorism secretly instigated by the Kremlin. Government leaders in Moscow will stop at nothing to rebuild the Soviet Union as they try to force the breakaway republics back into the fold. Neill discovers that the terrorism has extended to the weapons facility he is charged with inspecting. Communist agents have gone far beyond their original orders, and it's a race against time as the Marine - with the help of a beautiful Ukrainian journalist - tries to stop them - and come up with a plan to bring down the corrupt government officials in Moscow.

What listeners say about Red Sky at Morning

t had a hard time getting into the story line at first but after a few chapters I couldn’t stop rlistening. I am just not into war talk and airplanes but once I got past the introduction, loved the story..

I was engrossed in the story from the very beginning. The narrator keeps the story moving from beginning to end. The only reason I did not listen to it straight through from the outset is that I started it later in the day and had to go to bed so I could get up early the next morning.

My one complaint against the narrator is that he made Lt. Neill sound like James Stewart, and all the Ukrainians sounded like Dracula rejects. Still, I enjoyed the audiobook very much and will be buying more books by this author.

I received this audiobook from the author in exchange for an honest review.

Great fast moving story, keeping you on the edge.

Loved this story, fast moving and it keeps you on the edge of your seat.

This book is awesome. I love the way God was incorporated
Into the storyline. The author showed no matter where you are the Father is always in charge. Anxiously awaiting the other books to be on Audible. Much love to the author.

Interesting plot when a simple assignment is changed and now the talk is of war. Giving us an idea of what goes on when Russia attacks a plane. Well done. And good narration

Enjoyable but not outstanding

Written in 2013, this book fits well with the recent (2014) annexation of Crimea by Russia and the issues with Ukraine. Set in Ukraine and Russia, the plot revolves around elements of the Russian military trying to get the USSR back together.

It's an enjoyable book, well paced and interesting. It has a good mix of military information, details on the locations, character background and story intrigue. It doesnt get bogged down but it also didnt have me kn the edge of my seat. Nothing from it jumped out to me as amazing but by the same hand I have nothing really bad to say about it either. A quick, fun read.

I would read another book by the author but I'm not going to rush out and find one.

The narration was fairly good. Jack de Golia provided a variety of voices and accents for character. Some worked and some didnt. Other than that it was clear, well paced and easy to listen to.

Failed to capture my interest

It's not terrible by any stretch but it commits the ultimate sin of a thriller...it's not thrilling. I normally love books like this and it started of well, but never built up any real suspense. Full disclosure, I stopped listening about 5 hours in, so maybe the last three hours are great but there was just such a lack of urgency about the missing nuke it made me not really care what eventually happened. The narration is mostly fine but the Russian and some of the Ukrainian voices veer sharply past parody and are far too cartoonish to take seriously (the Ukrainian president's voice sounded like a mashup of Richard Nixon and Admiral Ackbar), and that really hurt the book overall.