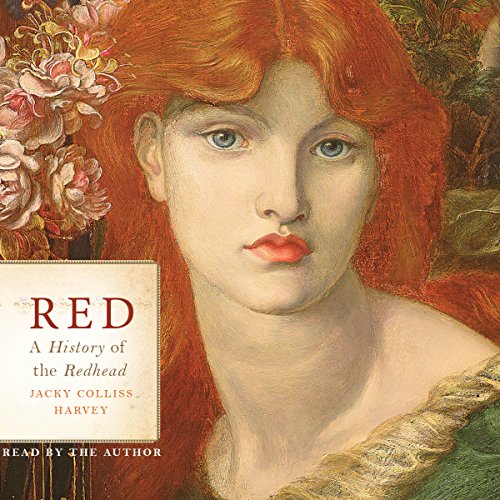 The mere mention of red hair conjures vivid images and provokes strong reactions. Popular stereotypes of redheaded women range from the fiery-tempered vixen and the penitent prostitute - Mary Magdalene is often portrayed in art as a redhead - to the fun-loving scatterbrain Lucille Ball. Red-haired men, meanwhile, are consistently associated with either the savage barbarian or the redheaded clown. But why?

Red: A History of the Redhead is the first audiobook to chronicle red hair and redheadedness from prehistory to present day. As both intrepid cultural detective and compelling storyteller, Jacky Colliss Harvey weaves a fascinating history beginning with the moment the redheaded gene made its way out of Africa with the early human diaspora. She goes on to trace red hair in the ancient world, the intolerance manifested against it as an indicator of Jewishness across medieval Europe, red hair as the height of fashion in Renaissance England, the redheaded "stunner" in Pre-Raphaelite art and the paintings of the Impressionists, and into the modern age, from its symbolism and adoration in popular culture to "gingerism", perhaps the last unacknowledged from of discrimination.

More than an audiobook for redheads, Red is both an exploration of red hair as "other" and a celebration of every aspect of its unique social and scientific heritage,at a time when it has never before been so frequently in the news or played such a prominent role in our visual culture.

This book is a fascinating look into the history, mythology, and socio-religious aspects of what it means to be a redhead, backed by science and the popular culture (art, stories, film, etc.) of different eras. The author's writing style makes it even more so, instantly engaging the audience in the topic. On the whole, it's a brilliant topic designed to push past the stereotypes and understand how and why they might have came about in the first place.

My only gripe comes early on when Cleopatra is mentioned. This seems to be a touchy subject for many people, as though seemingly every racial and/or regional group out there wants to claim the Queen for their own. Interestingly, the opposite occurs here. The author is quick to dismiss the idea that Cleopatra was very likely a redhead because of her Egyptian origins. It's as though because Cleopatra lives up to the hurtful stereotypes the author is trying to undermine. The defensive attitude is therefore understandable given the author's quest here. However, historical fact is just that and cannot be dismissed due to inconvenience. Cleopatra was a Ptolemy, the product of an incestuous family line from Macedonia. She had not one single drop of Egyptian blood in her, thus negating the author's rather short argument. It doesn't prove she was a redhead, but it doesn't dismiss it either, especially given the science of just how rare the gene is and why it expresses itself. If anything, the case is stronger than ever despite the author's attempt to gloss it over.

Save for this one tiny exception, the whole of this book is meticulously researched and thoughtfully executed. The author narrates her own work, which very rarely works out, but in this case kudos for her clarity and enthusiasm.

Thank goodness this was written by a redhead. As a redhead I agree the stereotypes exists (ginerism is for real).
Jacky's information is educational and insightful. Must reading for us gingers for truth seekers.
Her voice is delightful and pleasant. I hope she performs more audiobooks.

What's in a hair color?

I'll be honest: This book was fascinating, and provides some solid facts about redheads and how people view them. It's light reading, but fascinating nonetheless.

Great narration by the author

Informative and interesting even as a non- redhead. Well researched and well delivered. Extra plus for PDF accompaniment. I'm going red.

I absolutely loved this book I will definitely be getting the hardcover a great read for gingers and non gingers alike.

What I thought might be a totally boring subject for a good read, I took the challenge and pursued. While it has some tedious parts yet necessary to add full depth of the subject, I will recommend it as a part of a library. The author and narrator did wonders that someone not being a redhead herself could not have done so well. I found the history surprising and learned facts I never dreamed of because of predetermined hearsay on my part. It was fun reading and looked forward for the next chapter and enjoyed it all.

Insightful, daring, and beautifully read, Red looks at the history, science, and mysticism of us gingers in a way not seen before. Full of humor, heart, and with sources both in biology and popular culture, the novel delves into the most radiant hair color and the author herself gives the spoken words just enough personality to keep you hooked without being boorish. Highly recommended for any scholar, student...or fellow redhead curious about our origins and what makes our locks so unique.

Interesting stuff, I listened to this with my wife on a road trip. It is part classical history, art history, personal memoir, with splashes of science. Well written and read.

I loved this book. It answered so many questions for me as a redhead that I couldn't put it down.

I loved that it highlighted the bullying redheads fave and what's being done about it.

Started out as if it would be an academic approach, but devolved into many anecdotes strung together. The author is quite taken with herself.