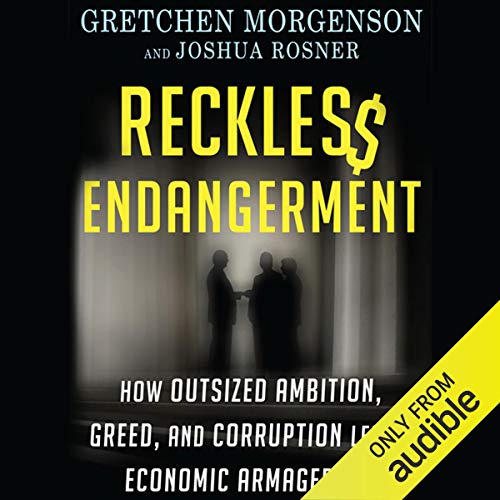 In Reckless Endangerment, Gretchen Morgenson, the star business columnist of The New York Times, exposes how the watchdogs who were supposed to protect the country from financial harm were actually complicit in the actions that finally blew up the American economy.

Drawing on previously untapped sources and building on original research from coauthor Joshua Rosner, who himself raised early warnings with the public and investors, and kept detailed records, Morgenson connects the dots that led to this fiasco.

Morgenson and Rosner draw back the curtain on Fannie Mae, the mortgage-finance giant that grew, with the support of the Clinton administration, through the 1990s, becoming a major opponent of government oversight even as it was benefiting from public subsidies. They expose the role played not only by Fannie Mae executives but also by enablers at Countrywide Financial, Goldman Sachs, the Federal Reserve, HUD, Congress, the FDIC, and the biggest players on Wall Street, to show how greed, aggression, and fear led countless officials to ignore warning signs of an imminent disaster. Character-rich and definitive in its analysis, this is the one account of the financial crisis you must hear.

"Naming names and taking no prisoners, they drill deep into one of the most disturbing scandals of our time, perpetrated in the name of helping "the little guy." Read it and weep. Read it and vow: Never Again! (Bill Moyers)

What listeners say about Reckless Endangerment

Would you consider the audio edition of Reckless Endangerment to be better than the print version?

As a former commercial banker, I had some idea of the events leading up to the Financial Crisis of 2008, but the depth and breadth of the enabling institutions (e.g., Fannie/Freddie, US Congress, the Fed, etc.) on both sides of the political spectrum was at once enlightening and depressing. I think Morgenstern's history and argument structure is terrific and lacks the lazy criticism seen in so many other places.

This is an essential look into how Fannie Mae drove down lending standards, leading to the real estate bubble of the last decade and terrible crash that followed. The prose is a bit purple at times, but a great story.

I liked it very much

What did you love best about Reckless Endangerment?

I am new to audible so I don't have much to base my review on, but if you listen to this book you will know what happened to the housing and mortgage market and who was involved.

Best Explaination of WHAT HAPPENED

The authors name names, document dates and statements and explain in detail exactly how the financial crisis happened. Alarm bells were rung and ignored by our "leaders" while they cheered and facilitated the lemmings march over the cliff. Great book.

This book is so informative, though the substance is infuriating and unbelievable. I am glad that I listened; reading it would have been difficult for me. I liked the performance, feeling a bit comfortable with the voice having realized that he also narrated In The Plex, which I also enjoyed.

A DIFFERENT VIEW FROM TOO BIG TO FAIL

This is a great book with some good insight to the Financial Crisis. Although I did enjoy Sorkin's Too Big To Fail, Reckless Endangerment takes a look at the push from the government (including Dodd & Frank) for affordable housing. If you have read/listened to other Financial Crisis books and enjoyed them, add this to your list, you will enjoy it.

What other book might you compare Reckless Endangerment to and why?

Too Big To Fail

What did you love best about Reckless Endangerment?

Reckless Endangerment was an interesting overview of how we find ourselves in our recent financial crisis (at least with respect to issues in the United States). The authors do a nice job of tying individual events of the last twenty years and how they led, foreseeably to our current situation. Overall I enjoyed this book though it felt at times less of an historic review and more of an editorial.

No, but I don't think that at all harmed my opinion of the book.

Overall, an enjoyable book though the perspective felt a bit slanted at times.

Very informative. Cleared up a lot for me

While this was not a typical story, it was very interesting and kept my attention all the way through. It cleared up a lot of confused spots in my mind about exactly what happened durring this time.

Where does Reckless Endangerment rank among all the audiobooks you’ve listened to so far?

Of the politically oriented books, this is in the top 3.

Not without a bottle of Laphroaig.

Read this before you vote for anyone.

The authors take you through a journey into this financial maze and go point by point letting the listener know what happened, who made it happen and what the effects were over the course of many years.

If your understanding of the 2007 to 2008 financial meltdown has anything to do with cars, ditches or keys you need to download this audiobook and listen to it…