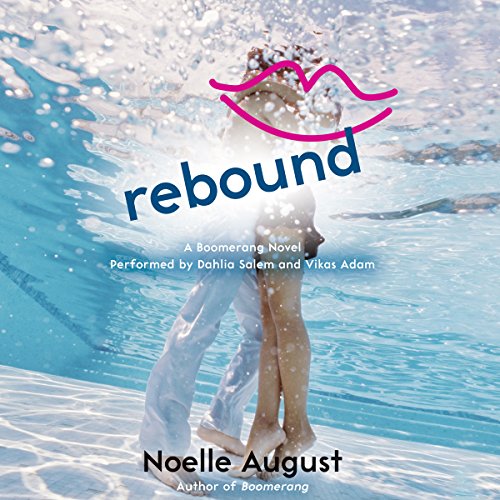 By: Noelle August
Narrated by: Dahlia Salem,Vikas Adam
Try for £0.00

Hooking up is only the beginning of the fun in this sexy and irresistible second installment of the thrilling New Adult series, Boomerang.

At Boomerang, one night can change everything...

Adam Blackwood has it all. At 22, he's fabulously wealthy, Ryan Gosling-hot and at the top of his game in the business world. His life is perfect, until a scandal from his past resurfaces and threatens to knock the tech wunderkind down and throw his company, Boomerang, a hook-up site for millennials, into chaos.

Alison Quick, the 21-year-old daughter of a business tycoon - and the very ex-girlfriend of Boomerang's former intern, Ethan -has a problem of her own. After nearly flunking out in her senior year of college, she has one chance to redeem herself to her father by proving that she deserves a place in his corporate empire. That means spearheading her father's plan to sink big money into Adam's company and launch it into the stratosphere - provided Adam has no skeletons in his closet.

When the two meet, their sizzling chemistry makes it tough to keep things strictly professional. But when Alison discovers Adam's secret, she knows she should bring it right to her father, who'll leverage it for his own gain and use it to ruin Adam. The only problem: she's falling for Adam - hard.

Will earning her father's approval come at the price of losing her first real love? Or can Adam and Alison leave behind past mistakes and conquer the world - together?

What listeners say about Rebound

Intrigue -- The long way around

This second novel in the series dives deep into Adam Backwood's past. August does an excellent job building suspense and anticipation to understand many secrets. Blackwood is trying to raise $20M for investment from the Quick Family. Allison, the Quick daughter, is sent in to do due diligence. The narration is ping, pong male female which works.

This novel is tightly focused on Adam and Allison, so you do not learn much about the other players. Although both Mia and Ethan do make an appearance (form book 1) in this book. I hope that August eventually develops a novel around Cookie, she is bit of an enigma. I recommend book two. Give it a read.

Even better than Boomerang which is saying a lot. Noelle August is a great storyteller and brought more complexity to this couple but let them grow and have fun. The new narrators portrayed this well. Hope there's another installment.

Good lighthearted read. Even better than the first book.
Narrators were perfect.
I highly recommend. If you like light well written romance, you will not be disappointed.