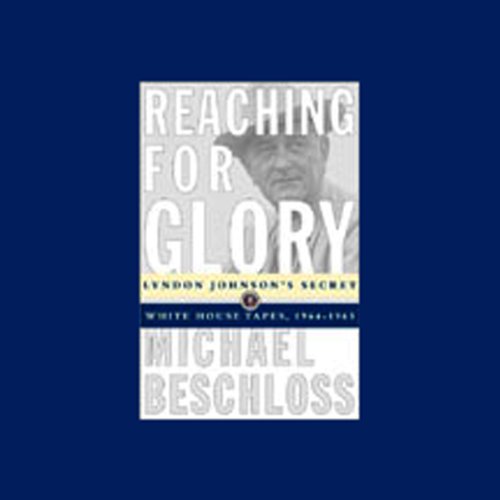 Why we think it's Essential: Little did President Johnson imagine that one of his legacies would be an outstanding audiobook. But the recordings of his phone conversations provide authenticity that can't be found in print transcripts. Historian Michael Beschloss sets the stage with a clear presentation of the tumultuous issues of the mid 1960s, but Johnson steals the show with emotional, earthy, and crude conversations with Jacqueline Kennedy, Martin Luther King, Jr., J. Edgar Hoover, and others. Hearing LBJ negotiate, flatter, and scold is like being a fly on the wall in the White House. — Beth Anderson

As Reaching for Glory opens, LBJ is campaigning for the greatest presidential landslide in history. To win, he hands embarrassing secrets about Barry Goldwater to friendly reporters. When Johnson's closest aide is arrested in a sex scandal, he tries to keep it from exploding before the election.

This audiobook reveals the secret history of how Lyndon Johnson took us step by step, often by stealth, into Vietnam. While publicly boasting that there will be victory in Vietnam, he privately worries that the war can never be won and that it will crush his presidency. He foresees the backlash against the war, civil rights, and the Great Society that will bring Richard Nixon and Ronald Reagan to power.

Reaching for Glory lets us hear LBJ's private telephone conversations with Jacqueline Kennedy just after her husband's assassination. It allows us to live at Lyndon Johnson's side, day by day, through the dramatic, triumphant, catastrophic, and pivotal year of a turbulent presidency that continues to affect all of our lives.

What listeners say about Reaching for Glory

An intimate glimpse into history

What an amazing audio experience. Having the opportunity to listen to President Lyndon Johnson's conversations with some of the most powerful figures in the world at that time has inspired a new love for me of history and brings about a new light to the Civil Rights movements in the 60's and the Vietnam War. Getting to actually listen to Martin Luther King Jr., J. Edgar Hoover, Jaqueline Kennedy Onassis, etc. seemed almost surreal to me and I had to double check that these were actual recordings. They are and I pity anyone that actually read the book instead of listening to the actual audio itself. I only wish I could listen to more of these type of recordings.

Eavesdropping on US History

This audiobook is amazing and at times mesmerizing in its content. You feel as though you are eavesdropping on private conversations of historic significance. It enables the listener to almost hear LBJ's inner thoughts as he struggles with some of the most wrenching issues of modern US history, including the Vietnam dilemma and the civil rights movement. LBJ is revealed as a complex figure with myriad dimensions. He seems painfully insecure and almost paranoid in the shadow of Kennedy's legacy--yet visionary in his advocacy of a new America. He is a powerful legislative and personal advocate for the rights of Black Americans, yet marred by his own dark predujices. He is tortured by the ever deteriorating morass of Vietnam, yet unable to summon the will to withdraw in "disgrace." LBJ is revealed as a consummate politician playing every side and manipulating friends and foes for his own agenda. He seems almost a Shakespearean figure paralyzed by Vietnam, his obsession with outside opinion and his own deep personal flaws. At times he is arrogant and seemingly in complete control, at other times he is a worried, depressed, and exhausted wreck, seemingly unequal to the weight of a presidency beset with unending crises at home and abroad. Bechloss does a masterful job of editing what must have been thousands of hours of taped conversations. His ability to put each piece in context makes this fascinating history come alive. The listener hears conversations with some of the most important historical figures of the 1960s, including Martin Luther King, Jacqueline Kennedy, Robert Kennedy, J Edgar Hoover, Harry Truman, Dwight Eisenhower and Robert Macnamara. Excerpts from Lady Bird Johnson's diaries add colorful personal flavor. Don't read this book-- listen to it and the other two volumes on audiobook. It is an incredible experience

Reversed my view of President Johnson

Prior to listening to this documentary I had a generally negative impression of President Johnson. These telephone recordings put that notion to rest. I had thought that I would be listening to the rantings of an unpolished and manipulative politician. Instead, I discovered a president who was a persuasive, intelligent, and benevolent statesman.

The aptly named Reaching for Glory paints a tragic and compelling picture of Lyndon B. Johnson as a man who truly wanted to be a great American president, strived for it, even, perhaps to the point of his undoing. In this collection of incredibly revealing audio recordings, the reader is offered direct access to the man behind the speeches, and is transported back in time to a pre-Vietnam War America, an era disturbingly similar to our own in some respects. Indeed, with the war in Iraq requiring the presence of more and more of our young men and women every day, one cannot help but contemplate the parallels and listen in awe as Johnson talks about the Vietnam War with his advisors, hesitantly - almost helplessly - making decisions that will cost the lives of thousands.

As a companion piece to other studies on LBJ, this work offers great insight; but as a stand-alone study, unless one happens, already, to be knowledgeable about the era, Reaching for Glory merely wets one's appetite for more or, worse, leaves one stranded altogether. It's not a book for beginners. The problem, here, is historical context. For example, the History Channel's excellent documentary on the Johnson tapes, which goes over many of the same audio clips presented here, does a much better job of providing perspective and offering analysis on Johnson's reactions, something Reaching for Glory fails to do -- very well at least. Because of this lack of adequate narration, the six-hour-plus running time of this book begins to feel a bit long, like one recording after another separated by snippets of commentary. The endless stream of scratchily-recorded phone calls begin to mesh together into a thick river of crotchety Texan accents with little sing-song fragments of Lady Bird Johnson's voice floating by here and there. Taken in short doses, maybe...but Reaching for Glory is not the kind of book one should try to listen to in one sitting or -- for God's sake -- while operating heavy machinery.

The other reviewers are right!

A pretty fascinating listen if you're historically inclined. I wish we could hear similar recordings of other presidents! It really makes you seem them (and the job!) in a different light.

great stuff - any history buff will love this. Can we get Vol 1 and 3 also?

If you want the intimate details that can only come from listening in on recorded telephone conversations and the audio journal of Ladybird J, this can't be beat. I found that it was especially rich in audio, and it never would work as well just to read the book. It is a bit slow at times, and kind of meanders a bit, but in all, a worthy way to experience that time more intimately.

This is the second in Bescholoss' books on Lyndon Johnson. It covers the political successes in passing social legislation and the painful episodes issuing from the War in 1964-1965. Here Beschloss aptly pieces together the audio tapes of the President and the diary of Lady Bird to tell the story. The result is a remarkable tour of the White House during these months.

Beschloss provides insight and background for every word the President says on tape. The tapes are wonderfully edited and hold the listener in rapt attention. The diary entries of the First Lady are read to illustrate.

Included are some absolutely delightful tapes including Mrs. Kennedy. Hearing her voice and getting an insight into who she was is worth the price of the book.

If you are interested in LBJ, politics, or leadership give this book a try. If you have no interest in any of those, just listen in on history. You'll be well rewarded.

Interesting, to a point

It is really great to be reminded that our presidents are human, that they have human feelings & that they do human things. This set of recorded conversations does that in an excellent way. But it does drag too, especially if you are fairly familiar with the Johnson presidency & with the historiography of the man. If you want to know about Johnson, really, this is not the right path, not the right primary path. It does provide some useful spice to standard biographies & histories of his period however.

This is the real LBJ the fully unvarnashed Johnson. You hear him planning for the election. You hear his concerns after the Kennedy assassination and his private conversations with Jackie. LadyBird is seen in her real self as well. She could talk with the President like no other. She was a full and real adviser. You hear Johnson's treatment of friends and enemies. You here his hatred of Bobby and his planning against him. You hear him ordering pants from a taylor and how he wants the zipper so it does not bother his privates, and you hear him poor mouthing a beautician in NYC so he will not have to pay him to fly to DC and do his women. Its a great 6 + hours.