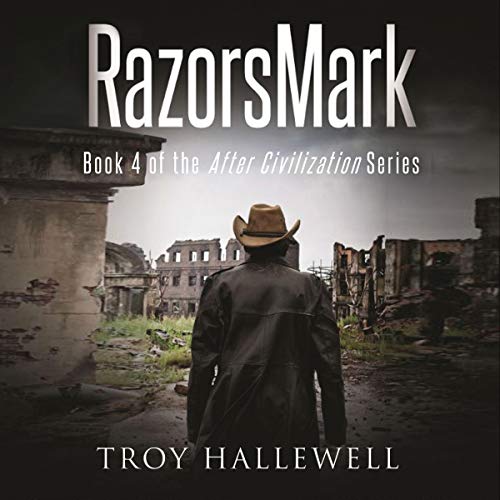 Rock and Caroline have survived an attempted assassins explosion only to be thrown into a world they had never realized existed!

Secrets are revealed as Rock and Caroline are introduced to a group of brave men fighting for their freedom from an oppressive regime in the most compelling of ways. Yet Caroline has a promise to keep to her people and duties to fulfill in order to keep it. And Rock, well, Rock still has Caroline.

Follow along with our heroes as they travel back to Solace where a great mystery will be finally understood and then on to the Waste, and see what miracles will manifest and what sacrifices will be laid on the altar of freedom in order to keep hope alive.

Join us in a world where Rocks were never meant to fly, and flying monkeys no longer patrol the sky!

What listeners say about RazorsMark

Troy Hallewell has done it again. A riveting story of Roc as he maneuvers through the dangers of the waste, it’s inhabitants, the invaders, and everything else and everyone else who’s lands surround the waste.

It felt like forever to wait until this story was released. And now, I want to re-read the whole series again.