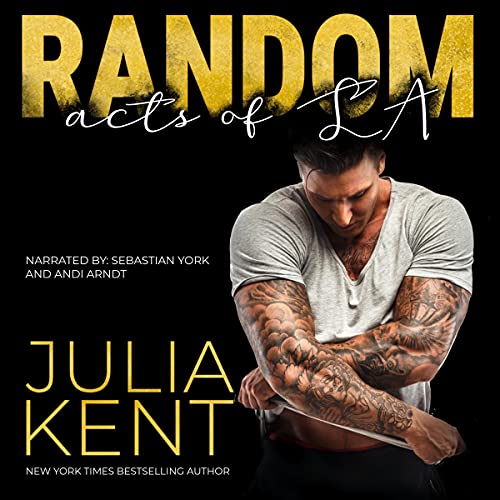 By: Julia Kent
Narrated by: Sebastian York,Andi Arndt
Try for £0.00

I guzzled another flute of Champagne and froze, the liquid in my throat, waiting to be swallowed.

We’d met a few times before, in passing. He was the substitute bass player for the band; I was the lead guitar player’s girlfriend’s best friend. In that weird sort of social circle thing where Venn diagrams get laid over different groups, Tyler and I were bound to be in the crossover once in a while.

He looked so hot. Short brown hair. A few days of beard. Bright green eyes that were more guarded than a Russian mobster’s. He was sleeved, the colorful tattoos a tapestry, but every time I met him I couldn’t quite see them. We only saw each other in dark concert halls, or tonight, under the stars.

He gave Sam a rare smile and a hearty handshake, forearm muscles bulging. I wondered what it would be like to have those hands on me. My fingers tracing those tats. Listening to him tell me the story of his body while he forgave mine.

Forgave it for failing me.

I shook my head fast to banish the thoughts that drew me into places so dark they became black holes of the soul. The gravity of trauma had a way of sucking all the good into it, and tonight I wasn’t going to let that happen. The opposite, in fact.

Tonight I was going to sleep with Tyler.

He didn’t know it yet, but that was okay. He would. Soon.

Random Acts of LA is the seventh book in the New York Times best-selling Random series, the ongoing story of the up-and-coming rock band, Random Acts of Crazy. When the band's bass player, Joe Ross, gets injured in an unfortunate sex act that gains nationwide coverage, it's tatted-up Tyler (aka "Frown") to the rescue for their first big concert.

There's only one problem: the morning of his flight to LA he wakes up to find someone's stolen all his money, his bass, his ID, and his pride. When he shows up at Maggie's doorstep to ask her to drive him from their hometown of St. Louis all the way to LA, these two damaged people learn quickly that being independent doesn't always mean being free....

What listeners say about Random Acts of LA

This book was ace and I loved Frown! So funny and so sad. Made me cry laughing and cry too. Great narrators. SebYo is wonderful and so is Andi Arndt.

i have never listened to a book before where I burst out laughing so hard that I had tears running down my face. This is a great listen.