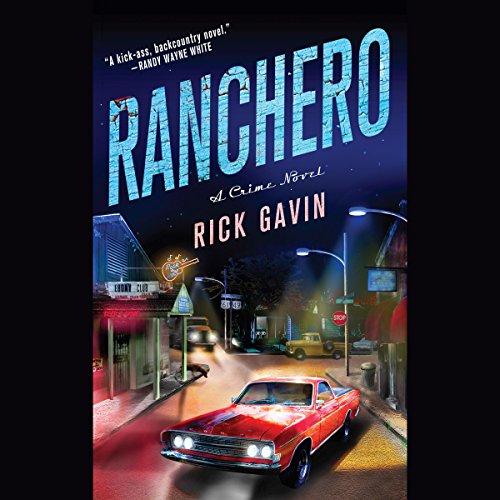 Repo man Nick Reid had a seemingly simple job to do: talk to Percy Dwayne Dubois - pronounced "Dew-boys", front-loaded and hick specific - about the payments he's behind on for a flat-screen TV, or repossess it. But Percy Dwayne wouldn't give in. Nope, instead he saw fit to go all white-trash philosophical and decided that since the world was stacked against him anyway, he might as well fight it. He hit Nick over the head with a fireplace shovel, tied him up with a length of lamp cord, and stole the mint-condition calypso coral-colored 1969 Ranchero that Nick had borrowed from his landlady. And he took the TV with him on a rowdy ride across the Mississippi Delta.

Nick and his best friend, Desmond, fellow repo man in Indianola, Mississippi, have no choice but to go after him. The fact that the trail eventually leads to Guy, a meth cooker recently set up in the Delta after the Feds ran him out of New Orleans, is of no consequence. Nick will do anything to get the Ranchero back. And it turns out he might have to.

An original and ballsy road-trip of a crime novel - most of it in Desmond's ex-wife's Geo - Ranchero is an unforgettable listen and a fantastic series debut.

"Full of inspired comic hyperbole, Gavin's rollicking debut does for the Mississippi Delta what Tim Dorsey and Carl Hiaasen do for Florida. ( Publishers Weekly)
"This first novel from Gavin is a little miracle. The dialogue is pitch-perfect…. One of the most enjoyable crime debuts in a very long time." ( Booklist)

This is like sitting next to a guy in a bar who puts ten different stories into every story he tells. The story itself is subsumed by a host of interesting characters who then present opportunities to diverge into other avenues which in turn split to reveal more characters. The voices assigned to these folks are wonderful and spot-on. The quality of writing and dialogue is excellent and the book does not suffer (as so many in this genre do) from unnecessary filler and angst-ridden rumination. Everything moves forward and the scenes are tightly drawn.

I look forward to some more of these.

I found myself laughing and hooting out loud at this well written tale of a repo man and his sidekick just trying to their jobs in the Mississippi delta. Their exploits lead them to meet some memorable and very funny characters. Ranchero is a winner!

Have you listened to any of David Carpenter???s other performances before? How does this one compare?

David Carpenter's narration of these exploits is marvelous and keeps you wanting for more. I hope to hear his voice again in the near future!

I absolutely loved this book! It's fresh and funny and written in a Southern vernacular that the narrator hits perfectly. The story is just complicated enough to keep you interested.

Humorous with good characters. This was simply good fun. I would listen to a book by the author again and would also recommend the narrator.

Narrator Doesn't Understand the Style of the Novel

Ranchero has a fast-paced plot with vivid descriptions of the characters and the Mississippi Delta. If you can stomach the narrator, which is a lot to ask I know, the writing is well worth your time. Just try to tune out the narrator and re-narrate Pearson's brilliant prose in your head.

The novel is told first-person through the eyes of Nick Reid, so all the beautiful prose is his; making it difficult to select anyone other than Nick as a favorite character. However, there are numerous colorful characters so the most interesting character is not an obvious choice.

The narrator doesn't understand the narrative style of the book. The book is noir crime set in the deep south; picture Raymond Chandler waking up in Jackson, Mississippi. The narrator seems to believe he's telling stories around the campfire while ridin' the ol' Chisum trail. It's painful to listen to. The narrator's interpretation of elderly southern lady Pearl is especially grating.

Could you see Ranchero being made into a movie or a TV series? Who should the stars be?

This is the first of three Rick Gavin novels, so it's tempting to say it would make a television series. But it's an ugly world painted by the author, so I doubt it's the kind of world many people would want to visit on a weekly basis.