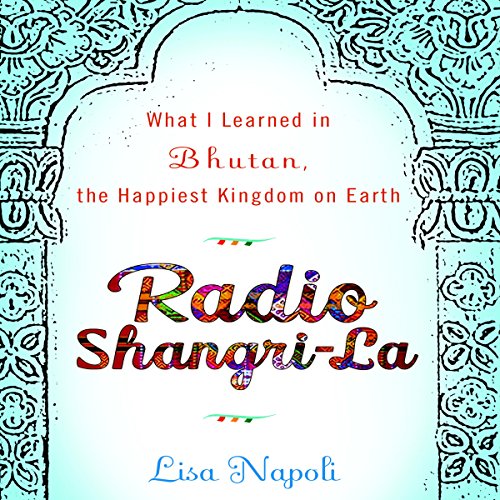 One part travel guide and one part documentation of a life-changing journey, Lisa Napoli's book about her love affair with the remote Kingdom of Bhutan is not a run-of-the-mill mid-life crisis memoir scenario. Fans of Eat Pray Love will find something to love here, but Napoli adds a bit more nuance and reportage to her effort.

This isn't surprising, especially since Napoli makes her living as a journalist for NPR's Marketplace  a fact that gives her narration a warm quality that is particularly lovely to listen to. More than her technical skill on the microphone, getting to hear her own performance of this story is particularly helpful in passages that are deeply personal, of which there are a few. There's a real connection between Napoli's words and her life experience, something that her narration highlights.

Throughout the book, we learn interesting facts about Bhutan through Napoli’s multiple visits there, spurred by a chance new friend's offer to hook her up as a volunteer with a startup local radio station, Kuzoo FM. Bhutan, a country which has long been cut off from the rest of the world, has only recently allowed its citizens access to television and the web, which makes the place a window into the past. Of course, it's also got its own unique culture. Reincarnated lamas come to town to cleanse citizens and rebalance energy; phalluses are drawn on the sides of buildings to discourage evil spirits; the government measures something called Gross National Happiness instead of monetary wealth; and a $200 per-day tourist tax continues to keep most of world out.

Radio Shangri-La is a balanced account of two starkly different lifestyles and places. The first is Napoli's life in Los Angeles as a high wage-earning deadline slave. The second is Napoli's Bhutanese life, which is slower, simpler, and more rewarding, though not always in the ways she imagines. The idea that mass media and consumerism do not a happy community make is a trite sentiment. But Napoli makes sure to touch on the balance between Eastern and Western cultures. This is most evident when a younger Bhutanese friend, Ngawang, comes to visit Napoli in LA. Ngawang's infatuation with America and everything it stands for gives real weight to the “grass is always greener” argument.

What's most delightful about Napoli's experience are the human interactions she has and the friends she makes through her numerous trips to the country. Stark cultural differences abound, but deep connection is a major theme. The Bhutanese welcome her. They are eager to learn from her and show off their country. They also teach her what true happiness is  giving and experiencing life. Gina Pensiero

Lisa Napoli was in the grip of a crisis, dissatisfied with her life and her work as a radio journalist. When a chance encounter with a handsome stranger presented her with an opportunity to move halfway around the world, Lisa left behind cosmopolitan Los Angeles for a new adventure in the ancient Himalayan kingdom of Bhutan - said to be one of the happiest places on earth.

Long isolated from industrialization and just beginning to open its doors to the modern world, Bhutan is a deeply spiritual place, devoted to environmental conservation and committed to the happiness of its people - in fact, Bhutan measures its success in Gross National Happiness rather than in GNP. In a country without a single traffic light, its citizens are believed to be among the most content in the world. To Lisa, it seemed to be a place that offered the opposite of her fast-paced life in the United States, where the noisy din of sound-bite news and cell phones dominate our days, and meaningful conversation is a rare commodity; where everyone is plugged in digitally, yet rarely connects with the people around them.

Thousands of miles away from everything and everyone she knows, Lisa creates a new community for herself. As she helps to start Bhutan's first youth-oriented radio station, Kuzoo FM, she must come to terms with her conflicting feelings about the impact of the medium on a country that had been shielded from its effects. Immersing herself in Bhutan'ss rapidly changing culture, Lisa realizes that her own perspective on life is changing as well - and that she is discovering the sense of purpose and joy that she has been yearning for.

In this smart, heartfelt, and beautifully written book, sure to please fans of transporting travel narratives and personal memoirs alike, Lisa Napoli discovers that the world is a beautiful and complicated place–and comes to appreciate her life for the adventure it is.

" Radio Shangri-La is a beautiful, touching and deeply compelling memoir by a well-known public radio reporter who arrived in the tranquil kingdom of Bhutan to help establish the nation's first radio station and, as important, to further her own mid-life assessment of a life that felt full of missteps. The book is delightful reading--honest, moving and quietly spiritual as it offers both an intimate portrait of a country only halfway to modernity and a soul in quest of meaning." (Scott Turow, author of Innocent)
“ Radio Shangri-La has shades of Pico Iyer and Bruce Chatwin and a similar genius for parachuting the reader into a strange land and culture. Bhutan has long fascinated me and Radio Shangri-La is the perfect vehicle to get there."(Abraham Verghese, author of Cutting for Stone)
"Bummed out in midlife, [Lisa] Napoli went to Bhutan to volunteer at the country's first youth-oriented radio station...She reveals the truths--and, yes, happiness--she found there. Perfect for everyone who loves finding-yourself-through-travel memoirs." ( Library Journal)
" Radio Shangri-La grabs you by the heart and takes you on a winding dual journey -- into the self and into a fairy tale kingdom known for measuring happiness as its gross national product. Charming, illuminating, and often ironic, this memoir is a continuous discovery of myths and realities in finding deeper personal meaning." (Amy Tan, author of The Joy Luck Club and Saving Fish from Drowning)

What listeners say about Radio Shangri-La

Loved it!!!! I can’t wait to have even a fraction of the experience that the author did.

At first I thought this was going to be one of those "eat, pray, love" knock-offs. I was pleasantly surprised to find the narrative engrossing and enjoyable. Almost makes me want to book a ticket and visit Bhutan.

A little too much midlife crisis/angst

Depends what your are looking for. I was trying to learn about Bhutan prior to a trip. Not really interested in author's story away from Bhutan.

Do you think Radio Shangri-La needs a follow-up book? Why or why not?

Good but not great.

I thought Lisa's story was a perfect combination of historical detail, current events and her personal memoir. I couldn't put my headphones down and now I'm ready to go to this magical kingdom!

I am an NPR Addict and knowing that Lisa Napoli works at NPR really raised my expectations. I feel that this just lasts a little to long. I really could do without the last fifth of the book.