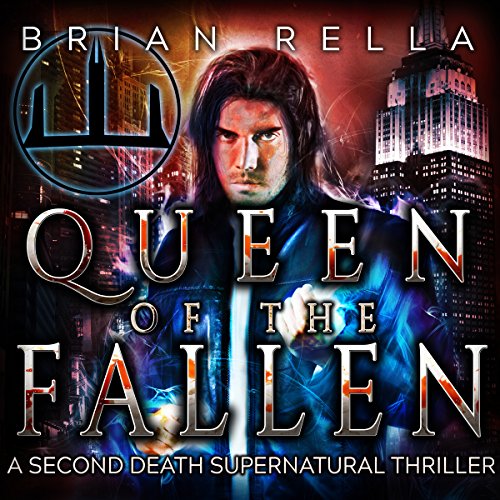 Wounded and war-weary, Frank Bishop returns to New York City to train a boy who could fulfill a 6,000-year old prophecy and save the world from Jessie and her plans for Armageddon.

While Frank heals and begins the boy’s training, threats loom on two fronts in the battle against the Fallen.

Jessie’s descent into darkness is complete, and her quest to free the King of the Fallen from the Second Death brings her to the desert of Arizona. There, one of the Fallen with the power to eat the souls of man was imprisoned centuries ago. Jessie finds him, and together, they search for the lost Stone of Serr’rah to open a portal to the Second Death and free their King.

In New York City, sadistic evil and chaos manifest in a lunatic and his demonic horde. He has his own plans for humanity and won’t let some bitch and a wannabe King stand in his way. He hunts Jessie across the country in an attempt to kill her...and he’s going to find Nalsuu and kill that bastard, too. Along the way, he strikes a massive blow to the Order of Watchers and begins to build his own army to rule the world.

Queen of the Fallen is book two in Brian Rella’s action-packed horror and dark fantasy series, The Second Death.

A great follow up from the first book proving that this series could be a one to watch.
A good mix of magic and religion give a unique standing for this story to continue to unfold.

The characters continue to develop and they provide new ones to add new dimensions to the story giving further details to an already compelling story.

The narration is once again on point providing unique characters and realistic experience.

Book 2 sees Jessie even more in the grips of the demon Nalsuu. She has freed two of his minions and is intent on freeing Dalkhu, the one who has the power to release Nalsuu from his prison. But the Watchers are also intent on stopping her. Frank has found a boy who could be the prophesied saviour, the one with the power to destroy the fallen forever! It is up to him to train him before Nalsuu is released.

I loved book 1 and dived into this straight after listening to it, and I have to say that I loved this one even more. There is more action than the first and I found myself hooked! The plot was fast paced and exciting and I was on the edge of my seat throughout. The world the author created is fascinating and I loved finding out about the Fallen and Watchers and about the chosen one!!

The characters were all well written and developed. Frank is as steady as ever and I loved how he handled the boy. Jessie is more messed up than she was in book 1 because the Demon has a stronger hold on her. There is a new player who seems to be working for his own agenda. He is unpredictable and deadly and I hope we get more about him in the next one!!

In all, this was an excellent second book and one I devoured. I am so looking forward to book 3!!! Brilliant world building and great characters make this a must read.

Todd Menesses read this well. He had a great range of tones and voices for the characters and was able to bring the atmosphere to life. One thing I did find with him though was his female tones were a little grating and got on my nerves a bit. But overall, a good performance.

AND IT KEEPS ON COMIN' - AWESOME!

Frank & Jesse are at it again in the second installment to this series. Loved it! Great compliment to the first, picks up and doesn't stop :) Loved the fast-paced action, great story and characters, and narration! All came together nicely, and chewed me up and spit me out, good good stuff. Looking forward to #3, can't wait! Awesome stuff!
I was given this free review copy audiobook at my request and have voluntarily left this review.

Queen of the Fallen picks up pretty where Watchers left off. This time around, we get introduced to a great new addition in Legion. Now the battle is being fought on three sides and the stakes have risen. Just the fact that Jesse gets to ride the demon like a dragon is amazing. Very fun and fast paced. Highly recommend.

I requested a free preview copy of this audiobook and I am leaving a voluntary and honest review.

Queen of the Fallen continues from book 1 so I highly recommend reading that first - believe me you want to read this series from the beginning. It is action packed and I am completely invested in these characters. The story grabs you from the start and doesn't let go until the very end. The narrator does a fantastic job bringing the characters and story to life. I am very excited to see where the author takes this story next

Nalsuu is closer to parole!

Book two is basically a continuation from book one. That’s not necessarily a bad thing as the story is pretty interesting and the main characters keep things moving. We gain a couple Watchers and lose a couple; win a few, lose a few. Jessie remains her grouchy self as she gains power and releases another of the Fallen. Poor Frank is getting worn out and is beginning to feel a bit lonesome. You’ll see why. Now only the Stone of Sira is needed to release Nalsuu from his prison to wreak havoc upon the world. This audiobook was given by the author, narrator, or publisher at no cost in exchange for an unbiased review via Audiobook Boom.`

So, this book was even better than the first one. This book definitely starts off much faster than the first book did. I think I'm used to the narrator's voice because it was still a little dry, but it wasn't as noticable to me as it was in the first book. All in all, if you like urban fantasy, you should check this one out. I'd be open to more books in this series.

Dive into the darkness of the 2nd realm.

I was freely given this book by the author for an unbiased opinion. I must say, this 2nd installment is very dark and foreboding. But it is so well written and narrated that it pulls you in. I can't wait to see the light at the end of this tunnel in Book 3.

still not into it

I recieved this book free of charge for an honest review. still cant get into this series. the girl acts like the 14 year old she's supposed to be. the good guys are kinda dull and honestly I think my biggest issue is the narration, I just cant get into his tone. can kill time but isn't really my type of book

In the second installment of the story, we get more Watchers and even the military joins in fighting the Fallen, will the combined forces be enough to stop the Fallen from taking over the world? I really loved this book, great writing and narration especially liked how I could immediately tell who was speaking. I know some don't like that in their audiobooks but I really like it when the narrator gets into the characters and acts out the story. Well worth the credit. Now on to book 3!

I had very high hopes for this book. I liked the first and was looking forward to the continuation of the tale, but the dialog and the narration grated on me to the point that I was ready for the end and to move on. It was unfortunate because the complete story was so appealing to me. If I decide to finish the series, I will do it reading the book myself.