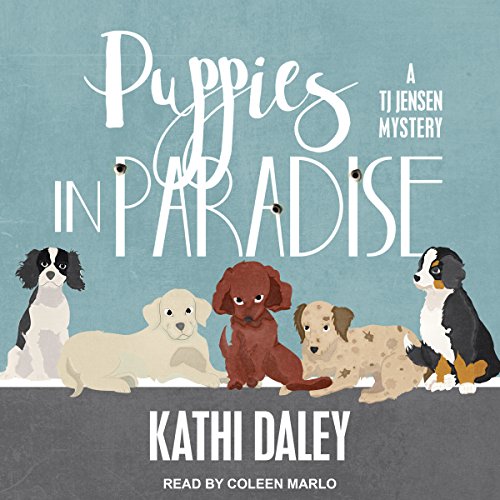 When a friend of TJ's is injured in a car accident during a blizzard, TJ takes responsibility for the litter of puppies left behind. Meanwhile, she works with Kyle, Jenna, and the gang to catch the person responsible for the death of a close family friend. When it turns out that the main suspects are also close to the Jensens, TJ must deal with one of the most difficult decisions she's ever had to make.

What listeners say about Puppies in Paradise

I enjoyed this book very much,listening to it was even better then reading it ,more relaxing to just listen to a story and visualising everything. It was great.

Not as good as earlier

Kathi Daley has written another enjoyable installment in her Puppies in Paradise series. This one seemed to end almost too quickly as the mystery was solved quickly without any clues to follow. Coleen Marlo, as always gave a wonderful performance as she brought it all together.

Fun but missing some depth

Serenity has been dealing with the storm of the century, and everyone is going stir-crazy as Puppies in Paradise by Kathi Daley opens. On the 10th day of the huge snow storm, TJ’s grandfather asks her help because while talking to his long-time friend, a former deputy now doing his own cold case investigations, on the phone, when someone comes to his door, leading to sounds of violence and a hang-up. So her grandfather asks TJ to take him to check out whether his friend is safe, since the phone now goes straight to voice mail. When she arrives at the house, eventually TJ finds the man dead.

With the storm blocking off access to their mountain resort community, the police are short-staffed, leaving TJ to investigate, along with her team of friends. And of the cold case they most suspect the friend was investigating, few people who were in an official position at the time are still around. But they still plug forward for the sake of their friend in hoping to find his killer.

This book was another fun visit to Serenity, but it was too short to be called a novel. I enjoyed spending time with the lively characters of Serenity, but that left us with much less time for as in-depth a mystery as other books. Also, the title was not relevant to the mystery and only to a minor part of the book, as TJ takes care of the mother and puppies of a fellow teacher who is in the hospital. But they don’t fit much with the plot.

I enjoyed the narration of Colleen Marlo, who transports the listeners to Serenity. With this book we don’t get taken there as magically as in previous books, but that is the responsibility of the author, not the narrator. I suspect this book would not have as much life in it without the performance of Marlo.

In general, Puppies in Paradise felt like a good start to novel, but it needed more to flesh it out. There were many characters we’ve connected with who either didn’t appear or made only minor appearances. Further, at the beginning, TJ makes big point about a friend who is in the hospital in a coma, but even though we do see what happens to the friend, this is not someone we already knew from previous books, and there seems to be no purpose for her appearance in the book. So despite its fun general nature, I can’t give this book as high of a rating as the previous books. I give it 3.5 stars.