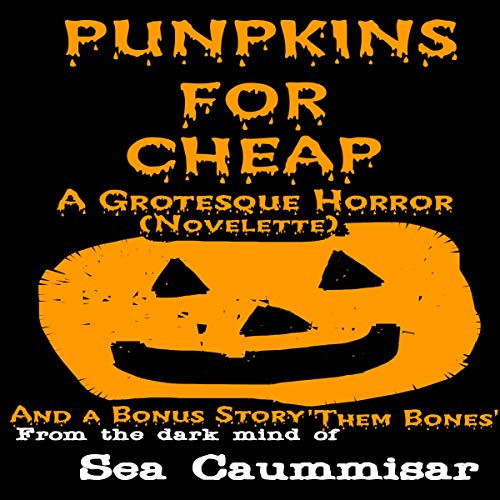 By: Sea Caummisar
Narrated by: Ronald Young
Try for £0.00

Just in time for Halloween! Trick or treat?

The first story is the trick.

The second story is the treat.

This book should never be listened to by anyone. It's gross and immature. It's almost as if a small child wrote it. If you enjoy poorly written dark humor, you might like this book. I mean, there's a chapter titled "Tampons Are Not Yummy". So use your imagination as to what kind of story this is.

This book will get bad reviews (if anyone ever listens to it). I expect that. If I had to review it, I would say it was the dumbest book I have ever heard/wrote. However, it does make me laugh. (Oh yeah, it's kinda gross too.) At least it's short.

Plus, it could be scary. What if maggots evolved and wanted to take over the world? A maggot has invaded Jimbo's brain. The maggot has plans to make baby maggots and sell them inside jack-o-lanterns.

Plus a bonus story titled "Them Bones".

What listeners say about Punpkins for Cheap