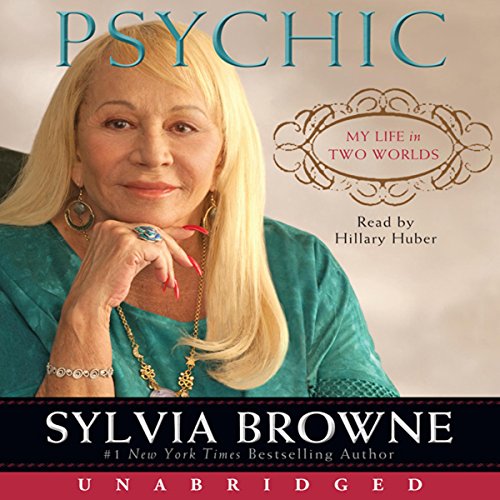 At the age of 73, New York Times best-selling author Sylvia Browne is ready to tell the whole story of her extraordinary life. In Psychic, we meet the woman behind the public figure: from the child receiving her first visits from the spirit world to the teenager doubting her own sanity; from the new mother living through staggering highs and lows to the burgeoning celebrity, and, ultimately, the successful, happily married woman she is today. Filled with never-before-told stories and otherworldly encounters, Psychic is a riveting account of how Sylvia Shoemaker, a traditional girl from Missouri, became world-famous psychic Sylvia Browne.

Nothing is off-limits. Sylvia tells the little-known truths behind her three failed marriages, including physical abuse, bankruptcy, and legal troubles, and the financial and emotional damage they wreaked. She revisits her personal demons and describes her physical challenges, including her relatively recent discovery that she'd suddenly gone blind in one eye. And then there is the greatest surprise of all: Sylvia tells how, once she had reached her 70s, and believed her romantic life was over, the real Mr. Right finally - impossibly - showed up.

While the press has freely, often bitterly, weighed in on Sylvia's most painful stories, she has remained quiet...until now. Unlike any other book Sylvia has written, Psychic reaches deep beneath the surface of her life, including professional and personal experiences that she is sharing publicly for the first time. With candor, warmth, and a great deal of humor, Sylvia Browne has written the singularly captivating tale of a life lived in two worlds, filled equally with harsh earthly realities and mesmerizing spiritual insights.

I have either read or listened to a few of Sylvia's books, and this is definitely my new favorite! I have a brand-new level of respect and love for Sylvia - all that she has been through, and she is still looking out for other people, caring for them, loving them, forgiving those who need it (even the former husband who forced her into bankruptcy and caused her public humiliation!)

I don't know that I could be as gracious - but then, after reading her book, I doubt I could live up to most of her humanitarian work and loving people. From the love and care given to the little girl who's mother basically abandoned her, leaving her in Sylvia's care - and Sylvia took her in and loved her and raised her as her own, to her strength in dealing with (and leaving) an abusive husband as soon as she saw even an inkling of a hint that he might start abusing their children, Sylvia has endured more hardships than many ever will, and come through it all with a shining, loving spirit, and a heart that loves God and desires to help her fellow man reach their full potential. I never knew she was a school teacher and found that really interesting - and I bet she was a great one!

The book is beautifully written, with humor, style, and grace; the story completely engrossing (I listened to the entire 8-hour book in 2 days). And although I really do like to listen to Sylvia read her own books (I love her low, gravelly voice that sounds much like my own - only better! LOL!), the narrator did a fantastic job, reading with great expression and very much in the same style that Sylvia would have read it herself - sometimes I would forget that I wasn't actually listening to Sylvia herself! Hillary Huber was really a perfect choice for narrator, if we must listen to someone other than Sylvia herself.

I know I'll be listening to this one again, and it has become an instant top-of-the-list favorite in my Audible collection!

What disappointed you about Psychic?

I expected a great deal more about her work with the police and actual stories of her work.and interesting readings

What was most disappointing about Sylvia Browne’s story?

more about her and less about her craft...really not happy I had always loved seeing her on tv and this really disappointed me

Would you be willing to try another one of Hillary Huber’s performances?

its not about the narration

If you could play editor, what scene or scenes would you have cut from Psychic?

if you are expecting to get insight into her craft and how she came to use it and stories about her work law enforcement and people she read.....its not here

I found this to be dull and lacking in information on the paranormal. Seems to be mostly about her failed marriages and legal issues.

really believed everything but the slime part.

Would you consider the audio edition of Psychic to be better than the print version?

I do I love listening to books I wish I could here some of her recordings while she under hypnosis.

What other book might you compare Psychic to and why?

Us IT reminds me f MY other book I bought about Pyschics very similar the way they started finding out they had this gift.

Yes and I did all night and had to reread some just incase I fell asleep and missed any I will read again I'm positive.

I love how she introduced her family and friends and her how she too had hardships like everyone else.she very honest I can tell and even with all this media about how she is fake it all is cheap she said herself I'm not always right I m not perfect some how I think she got it mixed up the MOM dying first before her daughter was found I think her mother helped her daughter figure out how to escape after she died . I saw this happen on real housewives of Beverley hills she was so sue one lady s husband was cheating on her wife at a dinner party later finding out it wasn't her husband it was the hostess of the dinner party who ended up divorced. It sounds a little the same a death only it was the mother
.does that make any sense .no one is perfect except GOD. .IT JUST MADE ME MAD WHEN I SAW ALL THE MEDIA HYPE OVER A SIMPLE MIX UP .COME ON NOW.DON'T DISCREDIT SOMEONE WHO HAS HELPED MORE THAN THE FEW MISTAKES ALL HUMANS MAKE.

YES, I love all the stuff she writes about, Angels, Ghosts, Spirits and my favorate Past Lives.

Sylvia Browne and her Grandma Ada.

All of it, i listened to it twice already, as soon as book finished I start at the begining straight away.

Entertaining, but I feel cheated

This is definitely Browne's most entertaining and well-written book thus far. Bravo!

However, I was hoping that she would have written more about the situation with her ex-husband Dal Brown ripping off all that money in a scandal which created a criminal problem for both him and the author.

After reading the book, I did some research, and it is clear she really downplays the entire incident in her recent book. It would have been nice to hear more from her side of the story regarding the incident. She should have used this book to face the issue head on so that there would be no doubt in the reader's mind that she had absolutely no knowledge of what her then-husband was doing in her name!