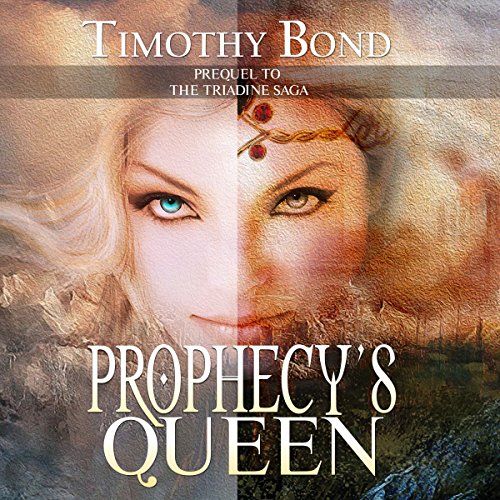 In this prequel novella to the epic fantasy series The Triadine Saga, we follow the elven Princess Rozlynn as she struggles with her role in The Prophecy and what she must do to keep the world from falling into darkness.

This is a story of love and conflict, personal growth, and freedom to choose your own destiny. The world of elves, dwarves, and humans is inexorably tied to magic, wizards, and dragons - as the battle of good versus evil, light versus darkness, wages on.

Will Rozlynn make the sacrifices and the choices necessary to ensure that The Prophecy stays on the right path? Will her sister, the elven queen, prevent her from making her own choice? Will Rozlynn's love for an elven hunter betray her and lead her astray?

Join us and find out this and much more in Prophecy's Queen.

What made the experience of listening to Prophecy's Queen- An Epic Fantasy the most enjoyable?

The story is well written. As a prequel the author knows the characters and the world they inhabit and it shows. A great book. Well written and well narrated that I thoroughly enjoyed.

A great style from the author that drew me into a land of epic fantasy and made me engage and like the characters within it. Brilliant!!

What does Jilletta Jarvis bring to the story that you wouldn’t experience if you had only read the book?

Great narration that matched the main character and plot perfectly.

Quite simply I enjoyed it. From start to finish. It drew me in and fired me up for the series.

Excellent story, let down by narrator/editing

What made the experience of listening to Prophecy's Queen- An Epic Fantasy the most enjoyable?

The story was very compelling and didn't slow down at any point. There was constantly something happening, rather than long boring descriptive parts, which helped the story flow and kept me listening.

Rendil was my favourite character - He seems to know things that no one else knows and is quite mysterious.

Would you listen to another book narrated by Jilletta Jarvis?

Yes, but there were a couple of mistakes made in this narration that weren't picked up by the recording editors.

Having a copy of the e-book, I was able to spot some errors that weren't addressed during editing. At two points the narrator pronounces "nonplussed" as "nonpulsed". There is also a point towards the end where it sounds like the recording was paused for a split second and when it continues the narrator repeats the same word she just said.

The story gets lost in the narration. Started over three times, before I finally gave up. I just couldn't stand to listen anymore.

The audio quality is bad, the voices she does are horrible, and it sounds like I imagine a patchwork would do, if it had a voice. Like it's clipped together in a weird way and it also sounds like lack of proper equipment. Not that I think it would have made a difference. The voices for the different characters were just... over the top and unpleasant.

The story might be decent, I don't know, but even with the major info dumps, I still felt like stumbling in the dark or landing in episode 42 of a tv series I'm not familiar with. If this is meant to be an introduction to the series, it fails. If it's for all of those who have read the series already, it's probably fine. They'll know the backstory already and get extra information and story about characters they already know and love.

To give this book a chance, pick up the Kindle version or a paperback version. The audio does not do this book any favors.

This prequel makes me want to hear the rest!

Would you try another book from Timothy Bond and/or Jilletta Jarvis?

I would! The series that this belongs to is something I'd be interested in for sure. I think the story was interesting and enjoyable, and I'd love to hear how the relationship between the Queen and King changes between the end of this story and the beginning of the next book.

Was Prophecy's Queen- An Epic Fantasy worth the listening time?

I think it was worth the listening time- but I'd say that as far as pacing goes, I personally prefer a bit more in terms of space between chapters and paragraphs. A little breather to help with the pacing of how the story is heard.

I received a free copy of this audiobook in exchange for an honest review via Audiobook Blast.

i cant wait for the rest. was very good and well writen

I couldn't finish it

Would you try another book from Timothy Bond and/or Jilletta Jarvis?

I would try Bond again. I think his elements were interesting. I only made it about an hour into the book because I just couldn't handle Jarvis's breathy girlish narration anymore. I tried slowing it down and speeding it up and at the end of the day just couldn't go on. I felt bad as I had received this book for free in exchange for an honest review. I wish I could tell you about the story. I thought that since it was a prequel to an established story, I might be embarking on a new big adventure. I wish it has worked out.

Very sweetly sick and breathy. Like what an adult thinks a little girl sounds like, but the main character was an adult. It was really off putting for me. I like the story so much though I am considering buying the paperback to see where the story goes.

Rozylnn tries to keep the prophecy on path

After listening to the whole prequel, I think this might be one for readers to read after the first book. The way it ends left me wondering what would come to pass for Rozlynn and if the prophecy was true or not. Thankfully, the author also adds the first three chapters of the first book, which gives you the answers. But I also think that reading the first book then going back to this moment would help fill in gaps a first time reader, starting here, will feel are present.

This story is of Rozlynn as she does as she feels is right to bring the prophecy to pass, for the good and not evil path. This book isn't all fight and glory. It's about a woman facing what she leaves behind and what new is before her. She helps make a life she can live with in doing so.

Rozlynn, our main character, is a smart and strong woman in the way she does what she's to do. She has strong reasons for her actions, though I can see others seeing her as she may think too highly of herself. But to capture the heart of a man who finds it easy to bed any woman, you have to stand your ground and make a show of how she won't be taken advantage of. She goes about this with a well rounded thinking, I liked this as it wasn't as cut and dry as others would like to think.

This is my first experience with the narrator Jilletta. I liked the sound of her voice as she voiced the many characters present. She did small extras to help the story pop in vocals such as; someone talking through a door with you on the inside, a dragon's voice is deeper (whether hers or digitally enhanced, I don't know but liked), and different tones for each character. However, at the beginning I struggled with the vocal editing. It sounded like the voice quality kept changing. Like the narrator did voices for different characters separate then spliced them in where needed to be. I felt the quiet space around her is different, along with the echo around her voice. There felt like there was a break and addition in the pauses. It's hard to explain, but I felt it in the beginning. I don't know if it was the equipment or the room she was in. There was also a strange skip in the narration of three to four words, like they were clipped in. Some may not even pick up on the background silence, or even bother them, but it was distracting for me. It cleared up before I was half way (maybe a third) through the four hours and continued on through the end with the clearer feel I could enjoy. There weren't any chapter number notations either.

I found that suddenly I was caught up with who was who and what was the agenda of everyone present, listening intently to learn what happens to Rozlynn and about the prophecy. But in the beginning of the story I felt like I was missing information, things that would have made it a bit easier for me to place where I was and what the characters were striving for. I was confused on two characters names for a short time as well.

After hearing the first three chapters of the first book, I'd be curious to hear where it goes. Prequels are hard to judge a series on as we don't get all the information but a piece of it.

*This audiobook was provided by the author, narrator, or publisher at no cost in exchange for an unbiased review courtesy of AudiobookBlast dot com, at my request.