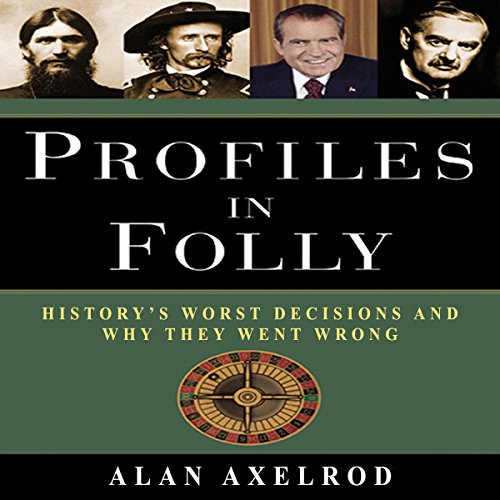 By: Alan Axelrod
Narrated by: Scott Peterson
Try for £0.00

Using the same engrossing anecdotal format that has proved so popular in Profiles in Audacity, Alan Axelrod now turns to the dark side of audacious decision-making: those choices that, in retrospect, were shockingly wrongheaded.

Although Axelrod investigates some dumb decisions by stupid people and some evil decisions by evil people, the overwhelming majority of these decisions were made by good, smart people whose poor judgment produced disastrous, often irreversible results.

The 35 compelling and often poignant stories, which range from ancient times to today, include: The Trojan Horse; the Children’s Crusade; the sailing of the Titanic, and the false belief that it just couldn’t sink; Edward Bernays’s 1929 campaign to recruit women smokers; Neville Chamberlain’s appeasement of the Nazis; Ken Lay’s deception with Enron; and even the choice to create a “New Coke” and fix what wasn’t broke. As with Profiles in Audacity, the deftly drawn vignettes will pique interest, satisfy curiosity, give pleasure, and present valuable lessons. And in addition to offering the same insightful analysis of the decision-making process, Folly also includes objective post-mortems that explain what went wrong and why. These are cautionary tales - albeit with exquisite twists ranging from acerbic to horrific.

"Prolific author Axelrod has an engaging writing style and a good eye for telling incidents, making his 35 "cautionary tales" of bad decisions (and their deciders) illuminating and interesting." ( Publishers Weekly)

What listeners say about Profiles in Folly

The book has so much potential. Good information given on each chapter as to the history of each decision. But and it is a big but the Narrator. I have heard better computer generated voices, this is really hard to get into because of the voice. I found it hard to stay interested and even got lost on some of the chapter changes. Sorry I presonally would not recomend

I've not counted how many events this book covers, but it is a lot. From the Challanger Launch decision, to the cigarette marketing strategy that resulted in women taking up smoking.

The only thing that lets the book down, is the really obscure historical events. They are well researched and presented, but by the end i felt a book of this type needed to remain reliability modern for it to be entertaining. But maybe this is more of an academic than an entertainment book, but either way it is really enjoyable...you just might end up skipping through some parts of the book.

This book is so bad that I think it should never have been offered for sale by audible if there is anyone in charge of creating its inventory. Unbelievably bad writing, the most simplistic of summaries and no analytical skills or insight apparent.

I thought this would be an objective historical view of history's mistakes. The first half of the book is mostly that, which is why I gave it two stars. Unfortunately, in the second half, the author tempers his explanations of mistakes based on his rather liberal political viewpoint. He compares Vietnams 58,000 U.S. troop deaths, to the Iraq war's less than one twentieth fatal casualties. George Bush is the worse president ever, so says the author. Really? Worse than Jimmy Carter? LBJ? Again, if I knew half the book would be slanted with leftist hyperbole, I would have not wasted a credit.

A skewed view on history

This book although diving into interesting times on history choose to ignore or disregard glaring facts to make its point. The author offers very little humility on behalf of acknowledging other view points and makes the book come off as my personal complaints about history instead of looking at the full story.

This guy looks to the left .

This guy views the whole world from a liberal leftist view point . Don't bother with this title unless you are a fan of talking points the left .

As fun to listen from start to finish.performance fantastic. I highly recommend suitable for middle schoolers on up.

Entertaining if not Engrossing

This is the sort of book that you can read over the course of two days or a year. You can put it down and pick it up a few weeks later because its made up of different short histories. The author doesn't go very deep into any specific story, so if you're already well acquainted with some of the stories you won't get much out of them. It's likely that you will still enjoy it however. In book form I'm sure this would be a good "bathroom book" and I mean that in a nice way.

No, not really. Each chapter opening creates expectation which is never really fulfilled. The examples discussed could all be categorized as something other than "Folly".