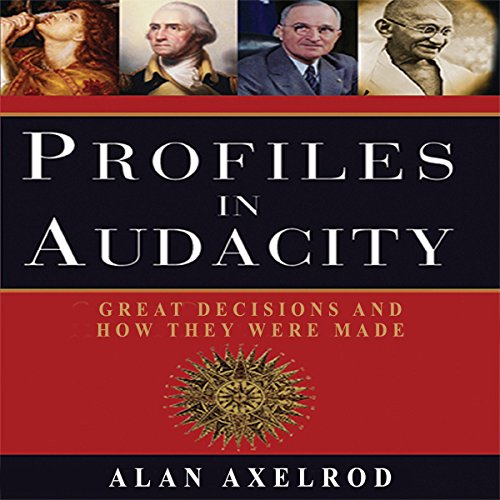 Here is a journey of exploration through history’s great decisions and those who had the courage to make them. In brief, compelling, and inspiring vignettes, best-selling historian Alan Axelrod pinpoints and investigates the make-or-break event in the lives and careers of some of history’s most significant figures. Axelrod reexamines history by revealing the answer to the fascinating question of why the people who made history made their choices - and conveys the resonance of those choices today.

What listeners say about Profiles in Audacity

Easy Listening; Entertaining; Not In Depth

I have now listened to several of the books in this series. The series reminds me of the "Don't Know Much About..." series by Kenneth Davis. Like that series, the Profiles series by Alan Axelrod is always entertaining, and often has interesting tidbits that you may not know, but the books are a bit like introductions. The Profiles books are collections of overviews concerning famous historical figures. This makes for easy listening, but it's perhaps not quite as informative or in depth as you would like. Most of the stories are detailed enough for even a well-informed listener to get something out of it, although a few are little more than encyclopedia type overviews.

The introductory nature is by design of course. If there was such a thing as a "bathroom audiobook" this would be it. That may sound disparaging but it isn't meant to be. What I mean is that this is the sort of book that you could read a bit at a time, over the course of a long time, due to the book's format. Rather than one long narrative, it is really a large number of short narratives, hence the "Profiles" title. It's the sort of thing that someone could pick up for some short diversion and be entertained.

The first section of the book contains the stories of a number of "audacious" women. Listeners may find this refreshing, as so many of history's most well-known figures are male. The bios of female historical figures tend not to be common knowledge the way that many of their male counterparts are.

Personally, I quite enjoyed the passage on Harry Truman. Overall, my favorite entries were the ones which concerned business rather than more general history topics like politics and war. In particular, the chapters on the Texas cattlemen/cowboys and the Tylenol murders were quite interesting for me.

Initially I felt that the title of this edition in the Profiles series was a bit ambiguous. When I think of audacity I think of someone who is being rude or impertinent, as in, "they had the audacity to..." However, in this case, audacity refers to the other definition of the word: the willingness to take bold risks (this turns out to be the primary definition in dictionaries, although I would say that may be outdated at this point).

The subtitle: "Great decisions and how they were made," helps clarify the title, but in my view it turns out to be a bit incongruous with the events of the book. Many of the "decisions" profiled in the narrative are of questionably "great" status. Some of the great decisions were either followed up by equally dubious ones, or ended up being futile. I'm thinking particularly here of the entries on Cleopatra and the Nez Perce War. In those cases it seemed like Axelrod simply wanted to include those stories in the book and so did his best to have them fit the theme of the book.

Next to content, narration is the most important aspect of an audiobook for me. This is mostly about taste and is purely my opinion, but I would describe this narrator, Scott Peterson (unfortunate name), as boring. In addition, the narrator's voice and speech is slightly annoying. He almost has a speech impediment, and while that is certainly no fault of his own, and in some cases could even be charming, for an audiobook narrator it's not usually a useful trait.

Peterson's narration includes a clearing of the throat which is not edited out. He also begins a sentence, stops, and then starts over on three separate occasions. These mistakes are obviously the responsibility of the editor, but for me it is always a major distraction. In many cases, those sorts of "typos," if you will, can make it difficult to take the work seriously, but that really isn't a concern here considering how well known Axelrod and this series are.

One last note on the narrator: he does repeatedly mispronounce certain names. Again, this doesn't shed a negative light on the content, as Axelrod is a well-respected historian, but it is always distracting. For listeners who don't know that Peterson is pronouncing names of persons and places incorrectly it can be worse than distracting, as they will now mispronounce those names/places until corrected.

Don't let my negative comments on the narration keep you from giving this book a listen. If you are a very serious history "buff" you may find this book to be a waste of time, but for the great majority of listeners there will be at least some amount of new information here. This isn't an in depth study, but most people with an interest in history will be able to appreciate and enjoy this edition of the series.