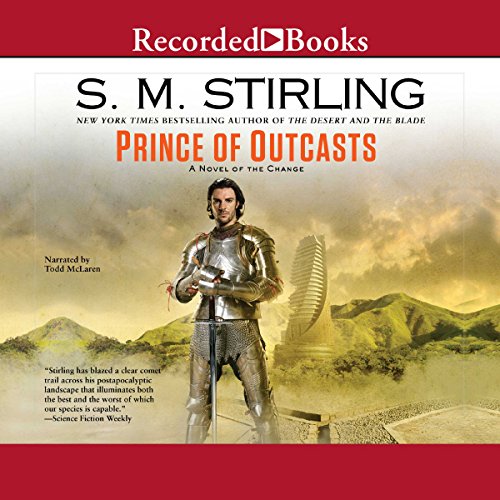 John Arminger Mackenzie wanted to be a troubadour, but fate made him the son of the king of Montival. His sister Princess Orlaith will deservedly inherit the throne of the High Kings, and it will only pass unto him in the event of her death, leaving the young prince on an unknown path to discover his true role in the family.

The opportunity to prove his mettle comes when John's ship, the Tarshish Queen, is caught in the fierce storm raised against the enemies of the alliance. When the clouds recede and the skies clear, John and his crew find themselves on the other side of the Pacific, in the island chains of the Ceram Sea, fighting to survive against vicious pirates and monstrous creatures of the deep, meeting new allies and mysterious enemies of this world and another. Now, Prince John must seize his birthright and lead his people in battle against the darkest forces man and nature can conjure against them.

What listeners say about Prince of Outcasts

Emberverse filler of the best kind

Many of the Emberverse books are character building taking the narrative forward and a few are more 'other' stories more world building then people building, this is the later.
This isn't a story for new comings for that try the 'Golden Princess', it's a filler book between bigger events, but it's the best kind of filler with new places, fast paced and a story line that's got some surprising twists.
At times Stirling gets a bit too detailed in the minute mechanics but I'll let him off because the symbolism in the final 2 chapters is some of the best in the series so far.

Ok, but the weakest book in the series.

Not to start the series with as it's the poorest book in the series.

I would say anticlimax but it never builds any tension to climax.

Yeah, I have a free pass at the cinema.

Please pronounce Maori correctly, please. A bridge of a book setting up the next one.

Read this before Audible offered it. Worthy!

If you like the series, this coming of age story is a welcome addition to "The Change."

So the book was really good. But now I have to wait an indeterminate amount of time to resolve this cliffhanger. My advice is to wait for the next book before buying this one so you won't lose sleep over it. :)

Every continuation of this series gets better and better
I'm so anxious for the end of the series it overwhelms my every thought from time to time.

I downloaded this book over a year ago, after listening to the Desert and the Blade, though in truth I’m not sure why... probably something to do with my not liking to leave things unfinished. At any rate, to the review.

This story, like the others in this part of the series barely rises to just past mediocre. As an author myself, I can appreciate the desire to flush out a story, when there’s more to tell. However, I’ve also come to appreciate the value in quitting while you’re ahead. It’s a concept that I wish this author had done with the end of the second part of the series (regardless of whether he’d foretold of Rudy MacKenzie’s death or not). Unfortunately this last part of the series has only emphasized the author’s overuse of descriptive writing to fill the pages. Case in point, the fact that there are many religions in play here... but for the love of GOD /GODDESS, etc. do we REALLY need to hear another prayer in one religion, only to be succeeded by a second and third?

Try as I might, I have always felt like the concept of these novels just didn’t mesh right (sort of like trying to force two opposing magnets together just because one can). Maybe I’m old fashioned, but blending fiction (perhaps a smidge of Sci-fi) with fantasy really leaves a bad taste in one’s mouth.

Let it finally be over soon.

As always a great read

this series has a special place for me and I love every installment! keep'm coming

Love these books. There really thought out and researched from beginning to end. Thanks to Sterling.

A fun continuation of a good series

If you have enjoyed the Change series up to this point, you'll enjoy Prince of Outcasts. The story shifts more to John, who I wasn't particularly interested in, but Stirling put him in a situation that demanded my attention.

If you haven't enjoyed the Change series so far, you probably won't enjoy this book, but why are you still trying?

I look forward to the next installment of this series.

I loved e everything about this book and began to love the characters again, especially Prince John and his crew. The ending was disappointing - cliffhangers aren't fun. Otherwise, 5 stars all the way!