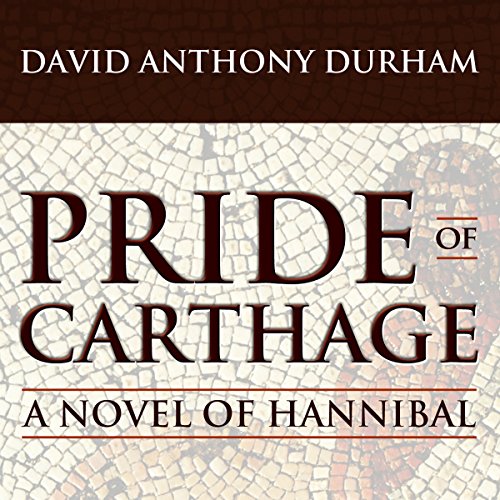 By: David Anthony Durham
Narrated by: Dick Hill
Try for £0.00

This epic retelling of the legendary Carthaginian military leader's assault on the Roman empire begins in Ancient Spain, where Hannibal Barca sets out with tens of thousands of soldiers and 30 elephants. After conquering the Roman city of Saguntum, Hannibal wages his campaign through the outposts of the empire, shrewdly befriending peoples disillusioned by Rome and, with dazzling tactics, outwitting the opponents who believe the land route he has chosen is impossible. Yet Hannibal's armies must take brutal losses as they pass through the Pyrenees mountains, forge the Rhone river, and make a winter crossing of the Alps before descending to the great tests at Cannae and Rome itself. David Anthony Durham draws a brilliant and complex Hannibal out of the scant historical record' - sharp, sure-footed, as nimble among rivals as on the battlefield, yet one who misses his family and longs to see his son grow to manhood. Whether portraying the deliberations of a general or the calculations of a common soldier, vast multilayered scenes of battle or moments of introspection when loss seems imminent, Durham brings history alive.

"David Anthony Durham knocked me out with Pride of Carthage. He brought Hannibal, his brothers, and the Second Punic War to vivid, bloody life, and established himself as one of the bright new lights of historical fiction. He's doing great work in science fiction as well, as the Campbell Award voters attested when they elected him the best new writer in the field. His epic fantasies make him a triple threat. No matter the genre, David Anthony Durham has serious chops. I can't wait to read whatever he writes next..." (George R. R. Martin)
"Durham's epic is truly a big, magnificent, sprawlingstory complete with a sizable cast of compelling characters, intricately drawn battle scenes, and fluid, graceful prose." ( Booklist)
"An epic tale well told, this will be easily understoodeven by those with limited knowledge of the period and may conjure thoughts of Robert E. Lee's battles against the Union in the Civil War. Highly recommended." ( Library Journal)

What listeners say about Pride of Carthage

Hannibal has to be one of the great military leader's of all time and this is an very good retelling of his campaign in Iberia and Italy. The style of language used brings a classical feel to the tale, and the battle scenes are well presented and show the brilliance of the man. Overall, I found this book very enjoyable and would certainly recommend it.

Though I think some of the history is questionable, I enjoyed the story. My problem was with the flow and character development, of which there was very little. The novel moves from one front to the next and from the perspective of one character to another without much transition, making it difficult to follow at times.
It also seemed as if major characters in the novel were virtually unknown to the reader at times.

I wish I had listened to negative reviews

What disappointed you about Pride of Carthage?

I'm very disappointed on several levels. I LOVED "Acacia" and greatly enjoyed the other two novels of David Anthony Durham's "Otherlands" trilogy. I ignored the negative reviews (at my own peril, as it turned out) because I had looked forward to Durham's next major work for years and I love good historical fiction, especially about the ancient world, almost as much as the fantasy and science fiction genres. Plus, I wanted to learn more about Hannibal and the Punic Wars, while hoping to cheer for him and his efforts against the "evil empire" (Rome). Perhaps Hannibal was not cheer-worthy (even anachronistically from my modern perspective), but as created by Durham, he's as bombastic and one-dimensional as any mustache-twirling villain of early cinema. I had no real feel or true understanding for why he wanted to march on Rome, other than "I want to be more successful than Alexander the Great" and "I want to make daddy proud" while putting those ridiculous Greeks and Romans in their place. Even if his depiction of Hannibal was based on historical fact and he was a jerk with whom you can't empathize, the writing was sub-par. I'm fine with a good anti-hero when done well, like Angus Watson's fantastic (and very negative) depiction of Julius Caesar in his Iron Age trilogy or many of Martin's "Game of Throne" characters or Joe Abercrombie's characters in his "First Law" trilogy. I felt Durham was trying to create a modern ancient epic in the high epic style of "Gilgamesh," "The Iliad" or "Beowulf," but if so, he failed to make something that was either readable or easy to listen to.

Would you ever listen to anything by David Anthony Durham again?

Yes, if he returns to epic fantasy.

I've heard Dick Hill before, and he was fine. But with this book he was loud, bombastic, melodramatic, ugh. I felt like I was being yelled out, to add insult to injury.

Would you ever listen to anything by David Anthony Durham again?

Perhaps, but I doubt it.

I thought the narrator was excellent. He certainly enunciates clearly.

The Punic wars are an interesting period.

I have a fondness for historically accurate fiction, and particularly, well researched historically accurate fiction. This book seemed to be trying to give us a picture of Hannibal, and Carthaginians as sub-Saharan Africans. It's not accurate, and the author seemed to go out of his way to try to indicate that it is. If it were an occasional inference, it wouldn't matter, but after a while, it became evident that he was trying to make it an issue. I thought the narrative suffered from it.

Absolutely a must read for any lover of ancient Rome. Fantastic narration and overall great book.

the story was great (granted, the original story is awesome so he doesn't have to add much ... personally want a fan of the reader

Bad voice casting ruined this, better to read it

This is a review of the audiobook version of this, not the book itself (which I really enjoyed)
I really hate to say this because Dick Hill always reads perfectly. He always gets the intent, meaning, and pronunciation right on whatever he's reading. Something even many excellent narrators struggle with.
But in this case, he chose to use a very, very enthusiastic Shakespearean British voice with long rolling Rs and tremulous vibrato. You almost picture him standing in tights, holding up a skull in the classic Shakespearean stereotype.
The result is that he sounds like the story is a comedic farce, and it completely ruins what is, at it's heart, a gritty, historical war story.
Don't take this as an insult to this award-winning narrator. But he was definitely miscast. Or at least, directed badly. Because he's actually American. So why THAT accent and voice?
I'm not sure who decided to go with that approach, but it came across as cartoonish.
In this case, I'll suggest the print version.
Skip this recording, for your own sake.

audible does allow me return

the voice is weird, and story dragging on in too much uninteresting details, and audible does not allow me to return.