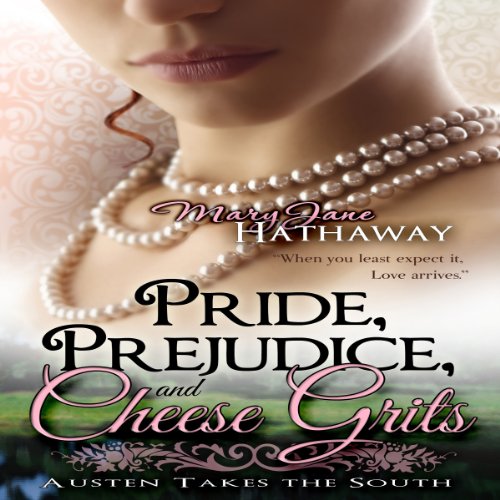 Shelby Roswell is a history professor on the fast track to tenure until her new book is crushed in a review by the famous historian, Ransom Fielding. She struggles to regain her momentum only to discover that Fielding has taken a visiting professorship at her college. The place that was once a refuge from the poverty of her past is now a battlefield of Civil War proportions.

Ransom is still struggling with his role in his wife's accidental death six years ago and was hoping a year at Shelby's small college would be a respite from the reminders back home. He never bargained for falling in love with the one woman who would give anything to make him leave. Together, Shelby and Ransom learn that home is never very far away, and when you least expect it, love arrives.

With a cast of Civil War re-enactors, an evil wedding planner, antebellum mansions, and several mysterious diaries, Pride, Prejudice and Cheese Grits will take you on a touching and hilarious ride through a modern South you haven't seen before. Newly revised, with recipes, a Pride and Prejudice variation, this book is the first in the Austen Takes the South series by Mary Jane Hathaway.

Just finished Ms Hathaway's book "Pepper in the Gumbo" and decided I wanted to try another book by her. I'm so glad I did! This is not one of those books that pretends to be a continuation of Jane Austen. It does have ties to "Pride and Prejudice" (quotes starting each chapter), but it is it's own story. If you've read Ms Austen's book it will only add to your enjoyment. I'm ready to start the next book in this series! I wasn't particularly fond of the narrator, but she is adequate.

Loved the southern twist to a classic! Narrator did Shelby and Ransom's voices perfectly.

As a Pride and Prejudice fan, I am cautious of plot lines mimicking Austen’s great work. This is a delightful book that has had me chuckling from Shelby’s antics and wringing my hands at her trials. The narrator is perfect for this wonderful book.

Sweet and romantic, contemporary story with a Christian theme, influenced by Pride and Prejudice.

Shelby, a teacher in history and the standoffish Ransom Fielding had some similarities to Austen's famous couple and the story followed loosely the timeline of canon.

Shelby had written a book that Ransom had reviewed unflatteringly which lead to a rather funny scene in his classroom and the animosity between them. The funny moments was a little too far in between though and I thought this a sweet read but uneventful. In addition, I wasn't convinced at Shelby's intellectual capacity, which is mentioned as one of her traits but she did not come off as smart to me.

A book worth rereading

I have read this book 3 times and listened to it once. Such a great list of characters to spend time with. I live the fire and passion in Shelby. That early scene with the chips and Gatorade just makes me smile. I found the situation believable which brought emotion and tears at times. Ransom is a complex character and seeing how he recovers from his past is such a relief. The performance was okay. Sometimes hard to tell which voice was which character in dialogue but did not take away from the story. I really love this story. MJH's version of Emma is equally as entertaining but I will listen to this Pride and Prejudice again and agian. (Would love to know if Belle Pointe Plantation is based on a real place so I could have a picture of a real plantation in my mind.)