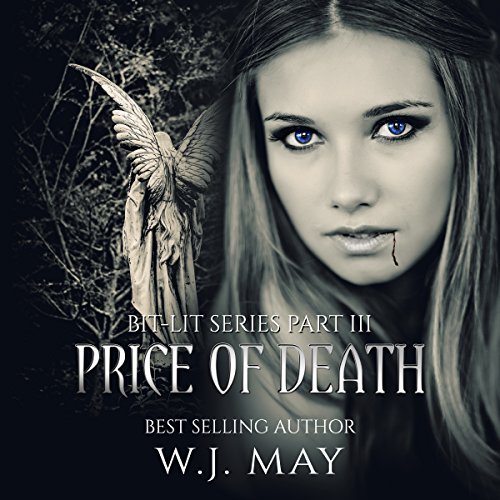 By: W.J. May
Narrated by: Elysse Breaux

From best-selling fantasy/paranormal author, W.J. May, comes a new kind of vampire shifter series. Get ready to be blown away!

Price of Death, Book Three of the Bit-Lit Series

The future is not a safe place.

Tay is finding it hard to adapt to her new life as Archon of a District, when suddenly, she received a bloody message that a delegation of senior Elders from all around the world will be arriving in New York to "deal" with the situation. Tabitha has just little time to get her house in order...

Kaiden, similarly, is finding it hard as the leader of the Shifters. He is called to a more simpler life, but cannot give up his duties. He has to try to bring peace to all the different Shifter Tribes if there is any chance at making peace between the different races. He is almost at the end of his tether, when a mysterious stranger confides in him that there is a way to unite the tribes - but it is very dangerous and nearly impossible.

What listeners say about Price of Death

I have listened to many books from this author; this just didn't hold my attention like I was hoping even after listening to the first two books.

The narrator ruins this book

I love W.J. May and I enjoy her writing style. I’m certain if I were to read this book instead of listen, I’d love it, too. But the narrator, Elysse Breaux, makes me cringe. She grossly mispronounces names and basic terms and her performance reminds me of an elementary school one act play production. Every character comes across whiny and childlike, making it extremely difficult to digest the plot. I can safely say I WILL continue to purchase W J May titles, but will never again purchase something performed by Elysse Breaux.