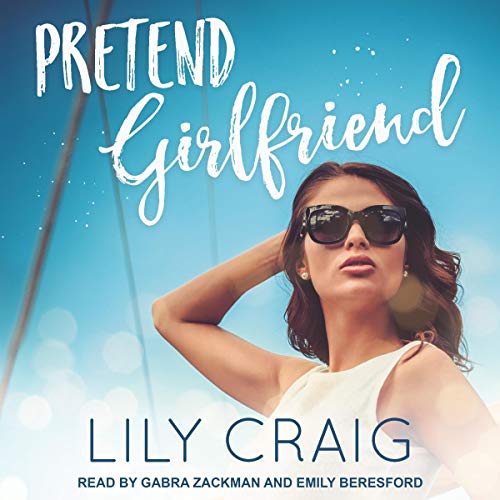 By: Lily Craig
Narrated by: Emily Beresford,Gabra Zackman
Try for £0.00

When Celeste Lamontagne receives a wedding invitation from her ex, she's furious. The only thing worse than being cheated on? Seeing your ex and the girl she cheated with get married. Less than a year later. And as part of a two-week long Mediterranean cruise. But they say the best revenge is a life well lived, right? Not for Celeste, it isn't. It's arranging an elaborate fake relationship with someone to make your ex jealous.

Lane Bishop is the perfect someone to do just that. Impulsive to the extreme, she loses her job right in front of Celeste. There goes Lane's best shot at becoming a stylist in New York City. She can have another chance if she agrees to travel with Celeste, pretending to be her girlfriend so that Celeste's ex sees her happy and thriving. The only catch? Celeste's an heiress accustomed to getting everything she wants. She's rigorous about details - some might say spoiled - which clashes with a free spirit like Lane.

The sparks between Celeste and Lane become harder and harder to ignore. Can they convince the wedding guests of their passion without the flames setting them both alight?

What listeners say about Pretend Girlfriend

I'm a sucker for the romance stories where two people pretend to be dating for whatever reason. I know it's silly, but this book really did a great job based on a pretend relationship. "Pretend Girlfriend " had witty dialogue, humor, adventure, sex, TWO NARRATORS, and even a nod to Metallica :) I enjoyed the audiobook a lot!

Worst audio ever - never got to the story.

Couldn't even get past the 1st chapter. Worst audio/reading I've ever heard. Why was the reader snarling the entire time? She sounded like a 14 year old girl auditioning for the part of King Arthur in a high school play. Simply awful. The title character is a woman - that was lost in translation. Couldn't tell if the voice was the lead character talking or thinking, or another character talking or thinking or just the voice over/monologue. The main character had the same voice as her father and her stylist and the romantic interest. And it was an angry, sarcastic, tone throughout (Mind you, I never finished Chapter 1, so maybe it got better).
I was looking forward to the story, and tried to hang in there, but gave up. I hate returning things, but there are too many good reads out there.
This probably is one of those better read than heard.

A must listen to story


The only reason I’m giving the story four stars because I think it could’ve been a little longer and it was a little short for my taste. And I believe it ended rather abruptly but the characters were very well developed and the chemistry between them was clear. Finished it in one day.

Loved the voyage, loved the characters loved the story. Narration was excellent. The combination of the two narrators was a great idea.

This kind of story can really go either way which made me hesitate to give it a try. In all honesty I was feeling a hit through most of it. The chemistry between the characters was there and left no doubts that they were meant to be. That's one of the hardest things to convey in any story.
It didn't start losing points with me till the main conflict; While it wasn't the one I had expected which could have been a pleasant shock, it wasn't. The conflict was kind of whishy washy. it didn't have the impact I felt had been building. in fact it felt too easy. the build up wasn't the kind you expect from an easy romance but the ending definitely was. the transition was jarring enough to make me pause and try to work out where all the tension had gone.

I like an author who can use unique language, but the story was a little lacking and the romance scenes didn't have any OMG.

I enjoyed this book. The sarcasm and witty banter was hilarious! The chemistry between the characters was realistic and nice to hear play out. Overall good book!

I really liked the whole premise of this story. It was full of character and I loved the way the two women of opposite poles came together. The only drawback to the audiobook was the narration of one of the characters was not very good in my opinion, it detracted from the story.