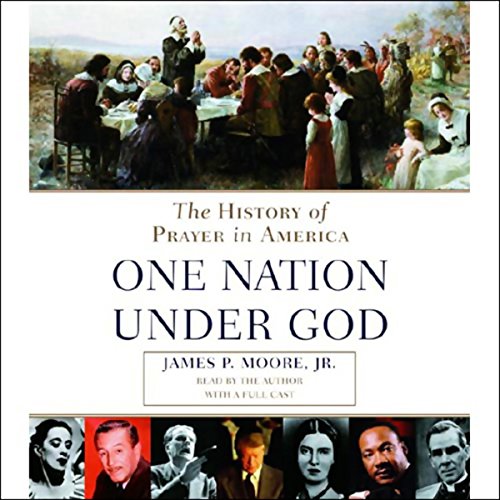 Prayer in America (One Nation Under God)

Prayer in America (One Nation Under God)

In this highly original approach to the history of the United States, James Moore focuses on the extraordinary role that prayer has played in every area of American life, from the time of the first settlers to the present day and beyond.

A stirring chronicle of the spiritual life of a nation, One Nation Under God shows how the faith of Americans, from the founding fathers to corporate tycoons, from composers to social reformers, from generals to slaves, was an essential ingredient in the formation of American culture, character, commerce, and creed.

One Nation Under God brings together the country's hymns, patriotic anthems, arts, and literature as a framework for telling the story of the innermost thoughts of the people who have shaped the United States we know today. Beginning with Native Americans, One Nation Under God traces the prayer lives of Quakers and Shakers, Sikhs and Muslims, Catholics and Jews, from their earliest days in the United States through the advent of cyberspace, the aftermath of 9/11, and the 2004 presidential election.

"I am enormously impressed with the scholarship and research that has gone into this book. I am convinced that it will have a resonance like few other works for many years to come." (Stephen Ambrose)
"In this day and age we need to be reminded of what unites us as Americans rather than divides us. Jim Moore's One Nation Under God speaks uniquely and eloquently to the resounding spiritual life and common heritage that we share as a people." (John McCain)

One Nation Under God

This Country was founded by people that were Christians, or otherwise, believed in God-----this is well documented in this book by the role that prayer has had in America. As people that believed in God we have prospered as no other country has-------and now, for the past several decades, the aetheists and other non-God believing "citizens" and others, are trying to force us to their corrupt standards, views and non-God beliefs....

I have been an Audible listener for a long time, yet I rarely rate books unless I feel very moved. This is one such book. It is truly sad and scary that we have drifted so far from the roots of what this country was founded upon. It is more obvious than ever that we have drifted from our humble forefathers' desires of having a country that offered freedom "of" religion, to one that is advocating freedom "from" religion. This book truly appeals to the spirit inside all men, whatever their affiliation might be, to renew their contact with the One who made us all. Fabulous book! Don't let it pass by!