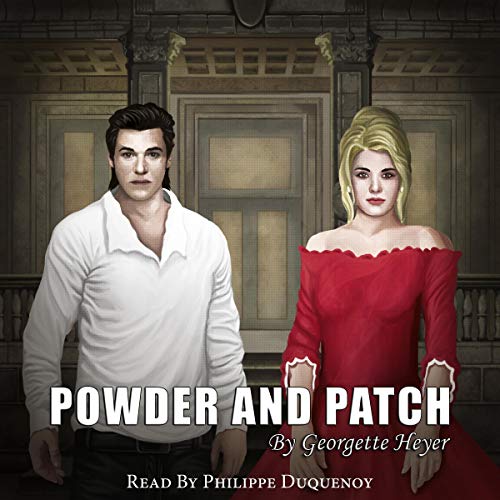 By: Georgette Heyer
Narrated by: Philippe Duquenoy
Try for £0.00

Powder and Patch was first published in 1923 under the title of The Transformation of Philip Jettan and later republished as Powder and Patch, but without the final chapter which was included on the original title.

The story takes place in the 18th century, where fashion was very much a la mode, with silks, stains, and powdered wigs. Philip Jettan, a handsome and sturdy youth, is rejected by the lady of his dreams, Cleone Charteris, because he is not foppish enough. Encouraged by his uncle, Philip decides to go to Paris in order to learn the ways of a stylish gentleman.

On his return, however, Philip wonders whether Cleone prefers him as he is - or as he was. Cleone in her turn, wonders whether Philip has really changed or whether he is putting on a front.

The resulting battle of wills is brought to a humourous and engaging climax, with mistakes being made by both parties.

Powder and Patch was written by Georgette Heyer, an English novelist, who began writing in her early 20s and has written over 50 novels in the romance and detective genres.

What listeners say about Powder and Patch

I love Georgette Heyer books. This isn’t one of her best. Let down by mediocre narration.

I normally enjoy Georgette Heyer and there are some great recordings out there. This one is so disappointing I’m going to return it. The narrator has no feeling for the characters, has poor differentiation between voices and terrible timing. There should also be pauses between scenes but he gives none. What a waste of audibles time and money.

This is by far the most difficult to listen to of anything I’ve yet heard on audible. Hetler’s voice was completely lost and I struggled to even keep up with the story. The closest I can liken this reading to is the movie phone recording. Bad.