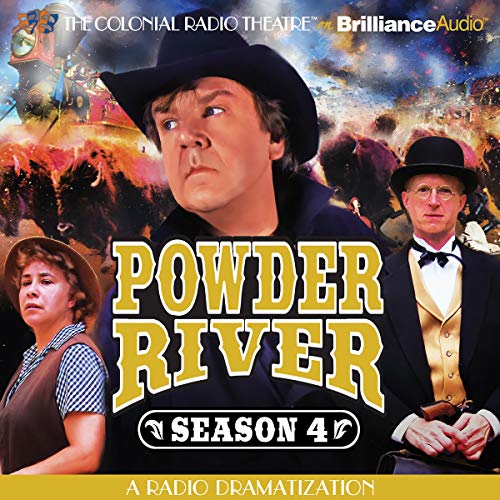 Britt MacMasters and his father track outlaw Jeb Pickett after the stagecoach hold up - A new band of deadly outlaws appears in the territory as Doc is seriously injured in an explosion - While in Chicago, Britt once again meets famed singer Jenny White - When a young lady is the sole survivor of an Indian attack on a raft traveling on the Powder, Britt, Dawes and Doc try to prevent another uprising by the Sioux - The railroad arrives in Clearmont, bringing one thousand workers and trouble.

These and many more exciting adventures from the entire fourth season of Powder River! Episodes include:

Everything about this story is perfect sometimes sad some parts to real but always exciting. I used to listen to Lone Ranger gun smoke and the like with my dad in the garage on Sunday while working On someones car.its better than that .

Can not wait until the new season it is that great. I now have the entire series.

they just keep getting better and better. performers kerp you engaged! looking forward to the next season@