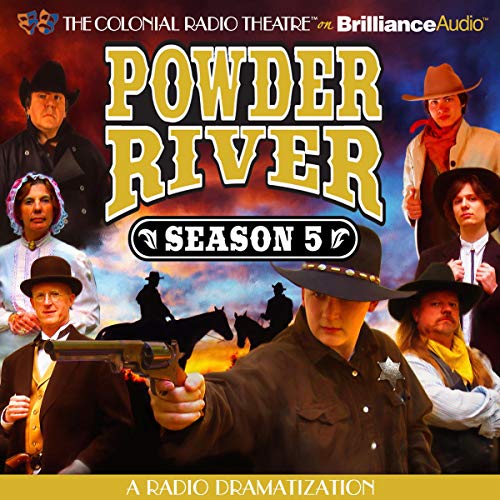 Five years have gone by since the devastation of the buffalo stampede hit Clearmont, and the three-part season opener titled "The Twisted Badge" puts Marshal Britt MacMasters in the most dangerous place he has ever been – the other side of the Law.

In "Those We Leave Behind", Britt finds 15-year-old Matt Andersen alone on the prairie - the son of an outlaw recently killed in a shoot out. Meanwhile, Jud Corey, whose brother was killed by the outlaw years before, wants his revenge on the boy.

And in "The Gunfighter", Chad encounters his first crisis as deputy when a mob wants to lynch a reformed gunfighter who has stopped in Clearmont on the way to his daughter’s wedding. These and many other exciting adventures from the entire fifth season are presented in this Special Collector's Edition! Episodes include:

This is a very exciting and well written book and great listen. Would recommend this book.

What did you love best about Powder River - Season Five: A Radio Dramatization?

The Powder River series starts off rough: bad acting, amateur writing, production mishaps. However, character development was strong in the first season. Each season Powder River gets better and better. Even though season 5 is the darkest so far (violence, language) it is the best. After season 1 almost every episode is worth hearing. The acting has gotten so much better it almost doesn't feel like the same show. There are some production errors here and there, but this is one of my favorite shows.

What was one of the most memorable moments of Powder River - Season Five: A Radio Dramatization?

Episodes 1-3 are a great way to kick off season 5.

Most of the actors are great.

If you could sum up Powder River - Season Five: A Radio Dramatization in three words, what would they be?

Character interactions makes you feel at home with your best friends and favorite relatives.

They make you forget it is just a story.

If you could take any character from Powder River - Season Five: A Radio Dramatization out to dinner, who would it be and why?

Probably Doc. He'd be a riot in some of the bars I frequent, especially Hanson's Bar in New Rockford, ND.

My entire family has listened to every episode of Powder River. We all loved each one, until we listened to this one. We were very disappointed with all the "Bad" language. We were shocked and saddened at all the curse words. These were suppose to be clean family shows. I hope that season six will be cleaner :-)

The narration was real good

Anticipation. Can't wait or the next one.

If there is any way we can delete the bad words out of the audio, please let us know.