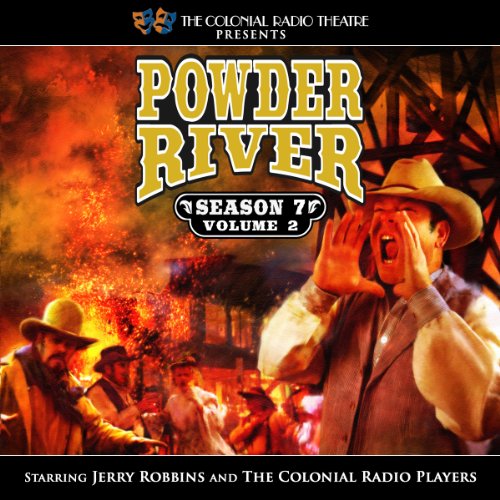 Powder River, Season 7, Vol. 2, contains the final six episodes from Colonial's long running western series' seventh season. Episodes include: "The Map of Legend" - two strangers are digging in the hills outside of Clearmont. Britt has his suspicions and sets a trap for them. "The Great Stagecoach Race" - When Matt discovers Jasper's old abandoned stagecoach, he challenges the train to a race, from Sheridan to Clearmont. "Pennies on a Dead Man's Eyes" - a dying man sees his life flash before his eyes. "The Rustlers" - when one of their men is wounded, Cattle rustlers head into Clearmont for a doctor. When they learn Doc is out of town, they kidnap Millie, knowing he will follow. "The Fire, Part 1" - Tragedy strikes Clearmont in the form of a deadly fire. "The Fire, Part 2" - Doc sinks into a depression after the fire, as Erica is forced to print a devastating story in the Bugle of how the fire may have been started.

Powder River is a full-cast audio drama written and directed by Jerry Robbins, Produced by Seth Adam Sher, with Music by Jeffrey Gage and cover art by Jeffrey Hayes.

What listeners say about Powder River

The Best Season Yet! Of What I Listened to so far!

Now I Am Going Onto Season 8 Of Powder River. This Show Is Even Better Than Little House On The Prairie. Well At Least It Is To Me Many Might Disagree But I Don't Think It's Possible. I Mean Each Season Just Keeps Getting Better & Better. Powder River Will Be Going Into Their 14th Season If They Continue The Series. This Audio Series Is Just Like Any Great Tv Series. Only Difference Is It's Just Audio Instead Of Video. I wouldn't ever want to watch the show the show would never be the same audio is the best format for this show. One Because It's A Great Family Friendly Show And There's Not A Lot Of Bad Words In It. There's No Inappropriateness Yes There's A Little Bit Of Violence But That's How The Wild West Was There's No Overreacting Or Adding To What Didn't Really Happen In The Old West. They Really Do A Great Job Making Sure The Show Is Correct Historically. The Show Even Got The Towns & Names Of The Rivers & Towns And Mountains Historical Battles All Correct. They Even Got All The Dates Of All of The Historical Wars & Historical Battles 100% Correct. This Show Is Awesomely & Absolutely Outstanding It's Just Perfect!! I Really Hope & Pray That This Wonderful Show Powder River Goes On For Many Many Many More Seasons To Come. With Everything In This World Going & Getting So Sad & So Much Darker It's So Sad & I Hate What's Happening To Our Country With All The Fighting With The Left & The Right Hurting Hurting Each Other. With All The Violence In This World Now. It's Not Even Safe For Our Kids To Go Out And Play Anymore. The World Is So Uncertain Now. But this Show Gives So Many People Joy & A Feeling Of Being Part Of The Town Powder River. It Helps Me Find A little Happiness & a Little Bit Of How The World Used To Be. It Helps Us To Remember Our Past & Hold On To The Good Memories Of Our Past Back When Things Were Safer For Our Kids & Families Back When The World Was A Safer Place. It's One Of The Final Shows To Still Honestly Stay True To Its Family-friendly Roots & A Safer Program To listen to With our Families So We Can Still Like In The Past Sit Around The Radio Together Like Back In The Past. It's So Awesome To Actually Have Time Together & Enjoy Listening To A Show That Makes Us All Smile & Get A Chance To Listen To You How The World Was In Our Great Grandparents Time. And See How Much Different Sadly The World Has Gotten The Bad Way. We Should All Listen To The Show & Take from the t lessons From It & How We Can Take Our World And Make & Take Our Country In A Direction That Will Better Us All & Help Us Reverse This Horrible Direction The World Is Going Down And Take Us Back Onto A Good Path That Will Bring Back a Safe Family Friendly Country & Family Friendly Communities & Towns Forv All Of Our Families & Our Kids & Our Kids Kids And For Our Whole Country To Be Back On The Great Honesty Safe Path The Path Of Righteousness Like The Word Of God Says .

So much tragedy and death....why?

I like the stories and have bought all the way through season seven. I just don’t understand all the tragedy and death. I was hoping it would be more comical and light hearted. I held on to season 7 but it doesn’t get any better as far as death and tragedy goes. Jasper and the sheriff are the only comedy in the story but you guessed it jasper dies disappointing.

I love listening to these stories. It brings back memories. I used to play down at the Powder River.
Wonderful stories in every way. Thank you!

Awesome as I suspected.

This is another great production from a great group of people. thank you CRT and Jerry Robbins.

Take me back to the Powder river

What made the experience of listening to Powder River - Season 7, Vol. 2 the most enjoyable?

The story is non stop excitement and adventure, Theres never a dull moment on the Powder river

.The story keeps you interestedThe sound affects make you feel like you are there, The cast does a wonderful job playing there parts from beginning to end.

What does Jerry Robbins and The Colonial Radio Players bring to the story that you wouldn’t experience if you just read the book?

The story keeps you interestedThe sound affects make you feel like you are there, The cast does a wonderful job playing there parts from beginning to end.

The cast and crew at Colonial radio Theatre always puts everything they have into there productions, They respond to there fans on facebook , and its always a treat when jerry Robbins himself talks to his fans, Very fan friendly at CRT and that is very much appreciated. CRT lets you know when there are new productions coming out and gives us the fans there best efforts each and every production, keep up the good work JR and cast

Adventure and Drama along the Powder!

What did you love best about Powder River - Season 7, Vol. 2?

As Powder River enters it's tenth year, long time listeners and fans will appreciate the growth and history of characters and even the town of Claremont. Jerry Robbins not only a talented voice actor but a master storyteller. The listener who have invested in the Powder River series can feel with each series the growth of characters, a sense of time holding on against the changes brought on by the tide of history. Although just a story Robbins has created a time, place and characters that seem so distant yet face many of the same problems we face today. If this is your first ride along the Powder, it's well worth the time and investment!

What about Jerry Robbins and The Colonial Radio Players ’s performance did you like?

The voice acting is masterful in series 7 p 2 - characters are written and cast so well the listener is easily transported to the town of Claremont Wyoming on the eve of the 20th century.

The stories in the Powder series can be taken in doses or as a whole. Either way you'll be on the edge of your seat or checking the CRT website for series 8!

One of my Favorites!

I've been hooked on this series for several years and the latest installment has set the hook even deeper! Good fiction makes me care about the characters and good acting makes them come alive in my imagination. Powder River delivers on both counts. Gentle humor wraps the advent of technology in the late 19th century, while true emotion captures the challenges of living in the Big Horn Mountains of Wyoming after the Indian wars and before the range wars. Highly recommend to anyone over age 10.