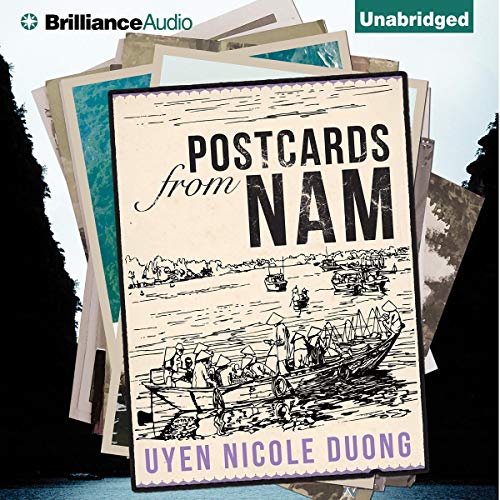 By: Uyen Nicole Duong
Narrated by: Leslie Bellair
Try for £0.00

For successful lawyer Mimi, 1980s Washington, DC, is a far cry from the war-torn Vietnam of her childhood. Time and sheer force of will have allowed Mimi to put those turbulent years behind her - that is, until the postcards begin to arrive. Postmarked from Thailand, each card is simply yet beautifully rendered in the hand of an artist identified only as "Nam". Mimi can’t imagine who Nam might be, a prickly problem considering his brief notes make it clear he knows her quite well. Determined to unmask him, Mimi begins what will become a decade-long search for Nam.

Her quest eventually leads her back to her childhood home in a small alley in pre-communist Saigon. For there she was beloved by a boy who dreamed of one day being an artist, a boy whose path diverged tragically from Mimi’s when the Vietnam War ended, in 1975. Yet, as she digs deeper into Nam’s painful past, Mimi uncovers an inspiring story of courage, survival, and the indomitable strength of the human spirit.

What listeners say about Postcards from Nam

The reader still wants to know some details

Where does Postcards from Nam rank among all the audiobooks you’ve listened to so far?

What was one of the most memorable moments of Postcards from Nam?

One of most memorable moments was when Mimi discovered details of what happened to Nam. The details revealed and the emotional intensity described from the characters describing those details impact the reader/listener.

My favorites were the alley abode scenes where Nam discovered the piano and Mimi described the amazement in his eyes ... where Nam reassured Mimi in her distress.

Yes. Actually did it in 2 long road trips. Great way to pass 200 miles.

Still unanswered questions: why was the $1,000 returned to Mimi? What was Nam doing in the night club to which Mimi traced him? What did Nam want Mimi and his brother to take from the postcards since he did not respond once Mimi found him? I understand that everything could not be found by Mimi, but it is not satisifying to not discover the gaps, from being found on the boat ... undestroyed because of his "beauty" ... to the nightclub ... no communication for 10 years and then a new postcard ... why? Interpretation is there, but humanity wants to know how he is surviving ... not just that he is alive.

Written in a very careful almost "Naive" voice, the lives of two youth's escape from a falling Vietnam unfolds. A repeat again and again of how the innocent bare the brunt of waring men. One trail, although difficult, fares well. Lives the American dream. The other...