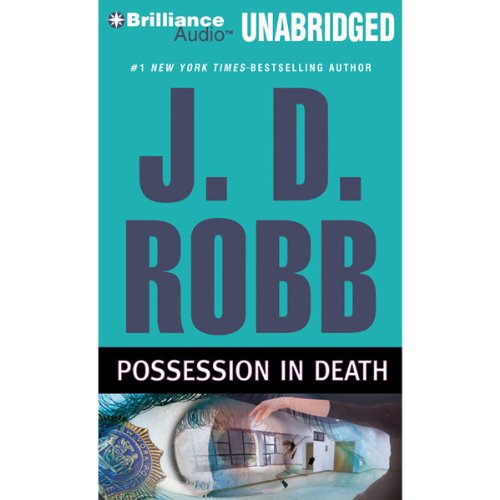 “The devil killed my body. I cannot fight, I cannot find. I cannot free her. You must. You are the one. We speak to the dead.”

Immediately after hearing these words, uttered to her by an old Romanian woman bleeding to death in the street, detective Eve Dallas begins to notice that her latest case has come with a number of interesting side-effects: visions of the deceased, instant familiarity with rooms she’s never seen before, and fluency in Russian. Likewise, there appears to be a force inside of her, a spirit other than her own, that won’t let her rest until she’s found Beata, the old woman’s great-granddaughter, whose disappearance two months prior remains a mystery. Desperate to be free of her new “gifts”, Eve pursues the facts until she discovers a link between Beata’s disappearance and the disappearance of eight other young women, all of whom attended the same dance classes, none of whom were ever heard from again.

Story as good as usual. Have read all of the Dallas books but this was spoiled somewhat for me by the narrator's atrocious Irish accent

A fun addition to the series

I really missed reading about the barbecue party in the previous book so that part was satisfying to say the least. This book is a short story about Eve getting possesed by an old Rom woman who died in her arms. It's an enjoyble story, but if you aren't into these type (occult, paranormal) of stories, I don't think it's a must have book. But for those die hard fans, I think it's a fun addition to the series

There is only one problem with this book and that is, it is too short. Once again J.D. Robb keeps your attention with excitement. She does not fail to keep all the characters interesting and involved. A fun read or listen in this case!!

I was very reluctant to purchase an audible ebook. I am a huge J D Robb fan and have all the series except some of these 1/2 books. As usual, Nora Roberts delivers a great story so that was no surprise. What did surprise me was the quality of the audio. I only purchased the audio as I couldn't find the story in normal kindle ebook (which is really annoying) and expected to have to force myself to struggle thru a dry, boring reading. Not so. The story was read with energy and excitement, and the characters individualised. I've now purchased a second audible and listen to it on my way to and from work.

This story starts where Indulgence in Death ended. The possession of Eve by a Gypsy death talker was interesting as Eve does not believe in the occult. This was a fast pace short story that kept you interesting even if the story was a bit far fetched. Always enjoy the character in this series. Good story for taking a walk with the Ipod.

As always, I love Eve Dallas' grit! These books have a great combination of mystery and humor. The characters blend well and never fail to entertain!

What made the experience of listening to Possession in Death the most enjoyable?

What does Susan Ericksen bring to the story that you wouldn’t experience if you just read the book?

Susan Ericksen's use of different voices is perfect. I can tell which character is speaking just by the voice. She amazes me.

I love the In Death Series. This review fits the majority of the stories. I listen to them over and over again.

For far fetched it is really good

I have read some of the other reviewers and I concur with them totally. J.D. Robb (Nora Roberst) has a fantastic imagination and makes it all work. And Susan Ericksen does another outstanding job.

I love this series of murder mysteries. JD Robb is always good and I enjoy listening on my long drives.

This was one of the better Dallas short stories. Kind of predictable but entertaining all the same. Good listen!

I love JD Robb. I love the Eve Dallas characters. Of course, this would be a novella, not a book. It is that short, and very predictable. A nice filler between the last and the next one. I kinda think that Eve should have hung on to her gift, since we have already traipsed into the supernatural, but I guess that would take the funout of future crimes. A new twist on Eve's experiences. After 35+ books, it is hard not to become too formulaic.