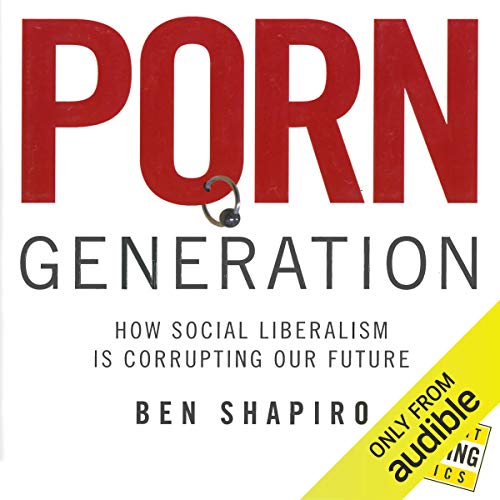 By: Ben Shapiro
Narrated by: Andrew Bernays
Try for £0.00

Andrew Sweeney’s performance perfectly complements the academic tone of this extremely thought-provoking conservative work; his reading is calm and measured, but eminently listenable, and he guides the listener through Shapiro’s arguments with great grace. An interesting and engrossing contribution to the ongoing debate on modern American cultural values.

very easy listen. the author backs his views and comments with a bunch of statistics stemming from research.

Shapiro narrates well, even if the concept is off

I didn't buy this book to agree with Shapiro, nor did I envision that I'd have my mind changed. And whilst the author makes some interesting points and analysis, I was correct - Shapiro didn't win me over though this wasn't my intention. Of course, starting this book I was aware of Shapiro's views on a wide-range of issues, as well as his fundamental Conservative leanings and beliefs. I myself do not share these, and consider myself a liberal. As a student of history though, I always immerse myself with the "other side" of the argument - if I reject this argument after careful thought and consideration, it can help qualify my opinions.

Shapiro as an orator is something to fear when he is armed with an agenda - he is key to cite facts, albeit questionable facts without much consideration for the "other side". I implore potential readers to take in this book, but do your research on the subjects just like Shapiro has done. Don't take his opinions as your own, much like he wouldn't take yours. Use this book as a balance, not an authority on the matter.

How the Descent into Sexuality Has Hurt Us

I would perhaps use it as an academic source, but I am not sure I would listen to it again for fun.

The narrator isn't a particularly good one, and the editing isn't helping.

That said, the actual content of the book was deep, well-researched, and well-sourced. It does suffer from the assumption that this book will be read by someone with little knowledge of American culture, and yet is difficult to penetrate without that knowledge. As a Brit, many things simply didn't quite ring with me, but the general subject matter did touch me as another inhabitant of the Christian Western developed world.

Would you listen to another book narrated by Andrew Bernays?

I would not pick another book by Andrew Bernays because he narrated it, and I would pick another narrator if the option is there. Andrew is serviceable, but not notable, and his performance here isn't particularly great.

However, his tone matches the tone of the book, and that is to be commended.

The book covers the education system, media system, and so on, with the effects on the youth and children of American society, as well as the increase of electronic consumption and the effects of the Internet on the generation Ben speaks about.

It has made me consider my attitudes about how I will raise my children, and how I shall hope to guide their future.

I would really recommend this book to be read, but the Audible is fair enough.

Quite a hard read, but an easier listen.

I attempted to read this book years ago when it was fairly new, but found the religious moralising too hard to digest. However, the parts of the indoctrination of our youth in to sexual consumers stuck with me. I still cannot gel with the religious moralising but the general message is a necessary one, unlike the author, I believe secularism is just as valid a route to morality as religion.
This book should be part of all teacher training.

A very needed book for this day & age

This audiobook carefully highlights one of important issues affecting the young people of society and how society can change it's amoral foundation for a better future. Particularly on the perspectives of sex and relationships

A thorough deconstruction of pop-culture

A very engaging and explicit deconstruction of pop culture and how the world is changing around it.

Narration:
Good in general, if slightly drawling occasionally. But that's pretty much the way Ben speaks himself and the writing definitely reflects Ben's style so it is pretty listenable anyway.

Theme and content:
The thoroughly researched statistics around sex and pop culture were staggering, we simply have not paid enough attention to how pop culture is affecting everything from education on sex to parents relationships with teenagers in the home. Incredibly interesting theme, and it was really valuable to have the modern popular figures and events deconstructed. Very interesting, enlightening and challenging read.

Criticisms:
Sometimes he deconstructs things a bit too thoroughly rather than sticking to the overarching themes, I mean we don't need to analyse every teen magazine of January 2009. But he certainly proves his point.

also this book certainly comes with a parental guidance disclaimer because these are adult topics and are discussed pretty explicitly so it's not one for listening with kids in the car.

All in all a great listen!

I wish it was with Ben's voice but it is nice

Fast and spot on. Ben has really good books. I really enjoyed this book too.

Very honest from the author

Interesting book. The author is very unapologetic in the views he holds and rightly so. He gives an interesting point of view and shows the gradual decent of our world into a more morally corrupt and oversuxualised world. Only thing lacking is any kind of practical solution beyond stating the obvious. But this book is very good for identifying the problem.

I like Ben Shapiro very much he is a brilliant debater and talks a lot of sense. Underlying his thought and speech is a strong commitment to old testament morality and it shows in this book, not that there is anything wrong with that, it is admirable that someone can seemingly stick to such a rigid and demanding system especially in the current times. Perhaps such a life provides its own rewards. However as he goes through the history of the decline of censorship and its spread into the mainstream he sounds a bit like someone who has been transported in time to the modern day from the victorian era. Things such as French Connections FCUK campaign are described in the outraged terms that it was obviously meant to provoke. A plethora of other very familiar phenomenon is described with the same offended tone which the narrator captures very well. I think there are things to be concerned about with the rise of ubiquity of porn and into the wider world. How extreme acts are becoming normalised for example. But he doesn't seem to notice that some good may have come from it too, like the awareness that women can be just as hungry and gratified by sex as men. There is plenty to make a really interesting book but Ben comes across as a bit of a square and a prude here.

an absolutely excellent book. I just wish Ben Shapiro himself had narrated it. I tried doubling the speed of the narrator but it just wasn't the same.

Im a leftist and i loved it

Ben Shapiro continuously impressed me throughout the book seeing as all his arguments were backed up my solid data. There are sometimes where it is noticeable that the data is skewed a bit to favor Ben's arguments which is why I gave it a 4 instead of 5 star rating.

As a social scientist

Shapiro is so smart. I have a MA is Cross-cultural studies, and found this book to be right on so many levels, and I learned some things in the process. Must read if you'd like to reverse the tide of hypersexualization, and restore innocence to childhood.

Listen to it, or read it, but don't neglect it

Absolutely eye opening. A must read, or listen for everyone. It will provide you with more knowledge and a greater understanding of why American entertainment's standards have fallen, and some suggestions on how to bring back, or raise those standards again.

The narrator was generally good, but there were a few small parts where he seemed... Uninteresting, or unappealing for lack of better words to describe it. But overall he was very good, and I'd listen to him again.

Please, get a new narrator.

As with all Ben Shapiro books, the book was fantastic. The narrator was absolutely horrible and robotic. It sounds like a robot is reading the book. Half the time you can't make a distinction between Ben's witty and sarcastic humor and the previous sentences because the monotone robotic narration. Book I definitely give a 5 out of 5. The narration if give 0 out of 5.

A great insight to the rampant culture pushed by liberals. Too much detail on occassion.

Im a left minded atheist and I love this book

Shapiro and myself disagree on many topics which is what makes this well researched book so interesting. This book hilights many of my childhood heros and how my generation has been influenced by them, mass media, and the free love do what you want mentality of my parents generation. As a teacher I have seen how the internet has an increasingly huge impact on the development of the kids in our nation. This book brings light to how a generation raised by mass media and the instaint gratification of modern society has impacted the lives of basically everyone around me, myself included. Our children will mimic the behavior they see which is why it is importaint to monitor what they see.

GREAT BOOK ON OUR MELTDOWN

There is no escaping the TRUTH. Shapiro is 100% correct in his argument in spelling out the moral degradation that we are witnessing in our society and how it impacts our culture (especially for our children). He craft fully outlines how we are being sold out by Hollywood, the Music Industry, our education system, and our government. If you have children, you should read this book. A+

If you have kids read this

So worth the read (or listen rather) to understand what my boys will be facing and worse when they are teens. Oversexing our children’s lives with too much television, videos games and music is bad parenting. This will inspire or compel you to do better!

The facts carve out an interesting moral landscape

A quick and interesting read. The facts are somewhat surprising. The line of purity is set at 'Ben', which is a little high. So some of the book seems a little like Michael Jordan yelling at his teammates.