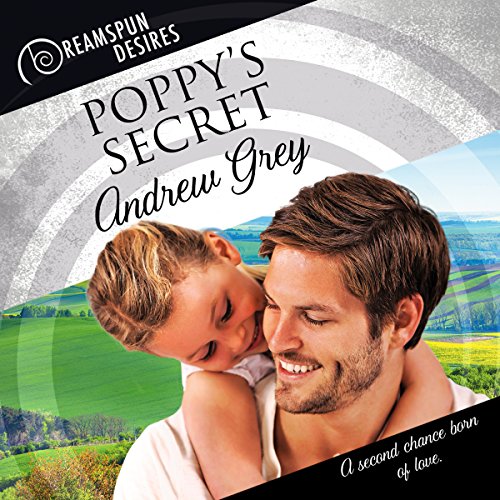 A second chance born of love.

Pat Corrigan and Edgerton "Edge" Winters were ready to start a family - or so Pat thought. At the last minute, Edge got cold feet and fled. Pat didn't bother telling him the conception had already gone through and little Emma was on her way. He didn't want a relationship based on obligation. He'd rather raise his daughter on his own.

Nine years later, Emma and her Poppy are doing fine. Edge isn't. He realizes what he threw away by leaving, and he's back to turn his life around and reclaim his family. It'll take a lot to prove to Pat that he's a new man, and even if Edge succeeds, the secret Pat has hidden for years might shatter their dreams all over again.

What listeners say about Poppy's Secret

What made the experience of listening to Poppy's Secret the most enjoyable?

I enjoy Andrew Grey and even though this is a shorter book I still enjoyed it very much. I liked the way the author didn't slam the two main characters together and bam its perfect. The story was well written. The narrator did a very good job.

Which character – as performed by John Solo – was your favorite?

This is a new to me narrator. I enjoyed him very much. He had both men perfectly and even the female characters worked. That's not something you find every time.

4 stars = I REALLY liked this audiobook!

Poppy’s Secret is a very sweet, second chance romance with just enough angst to keep me entertained, but not so much that it enters new adult territory. I have to hand it to Andrew Grey on this one, the angst that occurs bleeds over from Pat and Edge’s time together in their early twenties, appropriate for the young men they were but not the more world weary men they are now, and for the most part, both men seem to recognize when their disagreements begin sliding back into the land of immaturity and actively try to reign it in, wanting to deal with the problems of the present without so much of their baggage from the past controlling them. It’s a fine line for an author to write and Grey does it well, yet still allows for human nature and hurt feelings to result in the men succumbing to the angst and drama when tensions run high – and there are plenty of reasons for them to run high.

When Pat’s partner left him nine years ago, on the cusp of them beginning a family together, he made the difficult decision to raise the child their surrogate gave birth to on his own and keep their daughter’s existence a secret from Edge, allowing the man he loved to begin the life he obviously wanted more than the family they had planned. Edge’s return to town throws his world into chaos as Pat worries what the man he once loved will say when he learns of Emma’s existence, especially when Edge learns the real secret that Pat has kept all these years. Assuming this isn’t the first romance you’ve ever read, you’ll figure out what the secret is pretty quickly, possibly before you even start the book. However, don’t let that deter you because Grey’s talent in Poppy’s Secret is taking a predictable plot point and crafting a believable story that has an unexpected twist or two to keep you from feeling like you’ve heard this story before. For me, one of the plot twists was one that forced me to abandon the audiobook for several months because I had to be in the right frame of mind for it. No, it’s nothing horrific – this is a Dreamspun Desires title, after all – but it’s a topic that’s I’m sensitive to, to varying degrees throughout the year. This time around, the issue didn’t bother me at all and I was able to listen to the entirety of the audiobook without any problems. Well, that’s not entirely true. I did have to pause the sexy times scene that occurs while Edge is painting because it was a bit too hot for me to listen to in public; yeah, that one tapped right into my voyeuristic nature and had me dropping everything I was doing just so I could listen to it closely… twice… okay, three times. As much as I enjoyed that happy ending, it doesn’t compare to Pat, Edge, and Emma’s happy ending, especially as envisioned by Edge. That really was a beautiful dream.

I’ve said it before and I’ll say it again, John Solo brings a beautiful, storyteller voice to the Dreamspun Desires audiobooks. In Poppy’s Secret, he not only nails the men’s angst and frustration, but he does a wonderful job of conveying their fears, their hopes, and their love. I’m not sure how to preface this, but he also performs Emma’s voice in an interesting way. Rather than trying to feminize his voice and/or trying to make it sound younger or high pitched for a young girl, Solo seems to use a different cadence (I think that’s the right word) when Emma speaks. When Emma talks, there’s a sing-song quality to her speech that I think works far better than a pitch change would have. I don’t know if I’m making any sense, but I think people who listen to the audiobook will understand what I’m bumbling all over here. Needless to say, I really enjoyed Poppy’s Secret, loving the conflict and angst Grey forced Pat and Edge to navigate through to achieve their happy ending, as well as the way Solo brings each character to life.

it was so worth it I love this

A second chance romance, a vulnerable child, and a father trying to keep it all together – all perfect ingredients for a compelling story about love and forgiveness. This story was cute, angsty, and heartwarming. I loved the father-daughter bond between Pat and Emma. Despite all the difficulties and dilemmas Pat faced, he always put Emma first. Watching Pat, Edge, and Emma meld together and become a family was extremely satisfying and left me with happy, warm feelings.

Overall Rating: 3.75 Stars. This is a light-angst, sweet story that focuses on family and love. The writing was good, and the characters were nicely developed. The plot was a little stiff in some spots, but overall, enjoyable.

Narrator: I adore John Solo's narrations and this book was no different. I enjoyed listening to this audiobook as I drove to and from work.

I think I may be in the minority here – but I wasn’t a big fan of this story.

First, I didn’t think Pat’s devotion to Poppy (total abstinence!) and lack of a social life felt healthy and I wondered at his inability to even date in all that time.

Second, I really didn’t like Edge and his reasons for leaving nor his making Pat feel bad for his “secret”. I just never warmed to Edge very well.

Third, John Solo, though he did a fine job didn’t do much to make me fall in love with this story. He is a capable narrator and the sound quality was good but I didn’t find anything “swoon-worthy” in his performance.

Though it was as predictably sweet as I’d have ever wanted (or expected given the Dreamspun line) I didn’t love this. It was good and entertaining and fans of the trope and the author will probably be well pleased.