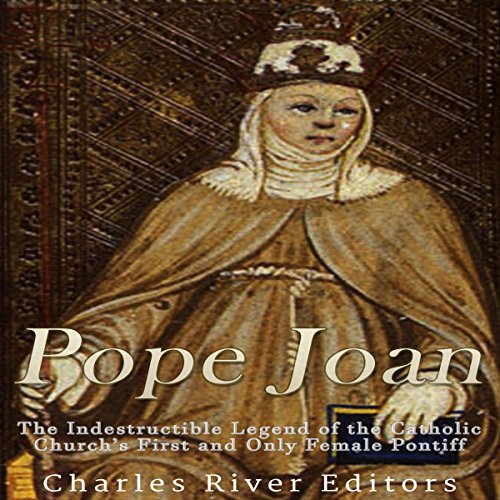 The Indestructible Legend of the Catholic Church's First and Only Female Pontiff
By: Charles River Editors
Narrated by: Scott Clem
Length: 1 hr and 15 mins
Categories: Biographies & Memoirs, Religious Figures
4 out of 5 stars 4.0 (2 ratings)

"I do not wish women to have power over men; but over themselves." - Mary Shelley

The Middle Ages in Europe were some of the most precarious centuries in recorded history, bristling with war, excitement, and chaos. The Western Roman Empire had crumbled, territories were rapidly expanding, and heavy ploughs, hourglasses, spectacles, tidal mills, and more pioneering inventions were popping up across the continent. It was also a time of extreme prejudice, when women were treated as second-class citizens. Their only purpose in life was to procreate by the dozen. They were confined to their kitchens and barns at home. They could not vote, and most definitely were not allowed to be involved in anything with the word "office" in its title. What was worse, only a handful of these women would succeed in hauling themselves out of the trenches, as females were not allowed an education.

Given this context, there have always been stories about women who broke the mold somehow, and of all the mysterious stories passed down over the centuries and chronicled by history's storytellers, one of the most fascinating and hotly contested subjects is Pope Joan, a young woman who was so desperate to squeeze herself out of the status quo that she had done the unthinkable. For decades, she disguised herself as a man, living amongst her oppressors as she paved her way to the papal throne. She would keep up this pretense for more than two years until that one fateful day, when it all came unraveling.