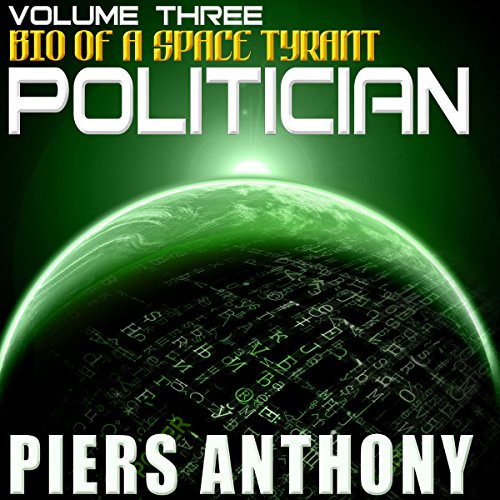 He awoke in a tiny, lightless cell, groping for memory...memory that had been erased. Hope Hubris, Jupiter governor, progressive populist, warrior hero, and presidential candidate...a "mem-washed" tool of the enemy. And if his captors' plan worked, Hope would destroy his own political career, leaving the fate of his planet in the hands of its corrupt presidential incumbent - Tocsin.

But Hope Hubris had a destiny to fulfill. He had the cunning to discover code words that could reactivate his mind...the strength to resist addiction to their drugs...the power to win the support of his countrymen, and finally the courage to make an agonizing sacrifice that would ensure his planet's future and his own destiny....

What listeners say about Politician

Forgot what a foundational book it was for me from when I read it the first time.

So this has an interesting start that will instantly draw you in, as if the normal feast of brutality did not bring you back to the table. Our boy Ole Hope has really stepped in it... some times literally, but of course he will be getting all the Honeys and his sister will be helping him rise to power. I think the best part of this book is how well it gets you to hate some of the antagonists. Anybody can make you like a hero, but making you loathe a character as fast as this book does to its antagonist is something special. But, come on guys you know Hope and Spirit are gonna find a way out of it. Great story, the narrator is a boss, and you will not want to stop listening.

I love Piers Anthony.. listened to 6 of his books so far.. great commuting stories..

Granted, this was the only book in the set that I read. As a student of political science, the story line lacked feasibility in many respects. Most objectionable to me personally was the premise that 700 years from now racism was still so blatant and polarizing. I found the storyline very shallow and predictable.