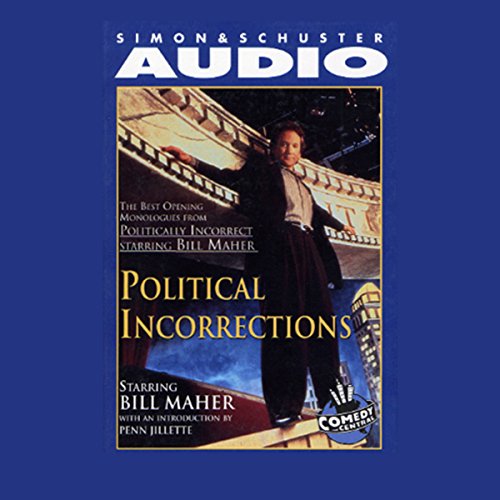 For everyone who's had their fill of politicians, TV trials and the daily events seen on the evening news, Simon & Schuster Audio offers some relief with Political Incorrections - a collection of the funniest opening monologues from Comedy Central's hit show, Politically Incorrect starring Bill Maher.

From Republicans to Democrats, politics to pop culture, nothing will be spared from Bill Maher's hilarious, "politically incorrect" commentary in this collection of his most outrageous material. Whether you're liberal, conservative, or somewhere in between, this witty, irreverent stab at the politics of the day will have you laughing as you listen!

"Viewers...have been enjoying topical comedian Maher's sharp wit for the past few years. Maher has terrific comic timing and, at 10 seconds per one-liner, there are more than 400 jokes on this tape. The live audience adds to the enjoyment, as well. These jokes have been, as Maher says once too often, "Satirized for your protection." They're also very funny. " ( AudioFile)

What listeners say about Political Incorrections

Maybe I wasn't in the mood to listen to a collection of monologues or something, I found this very boring. Each monologue was very short and there was no continuation. The monologue background naration (before every several monologues) definitely kills the mood. I would just pass on this one if I had known.

Wish it were longer

If only it were longer! What a great book, and so interesting to go back and remember highlights which were so big in society at the time. I am a huge Maher fan now but was too young in the 90's to be interested in these issues. Knowing the issues now and going back and hearing him is just glorious!!!

what can I say he's as genius as always. I love that it's clips from the show and not reading the script, Stop and breaks down each topic change. Will be buying more of Bill Maher.