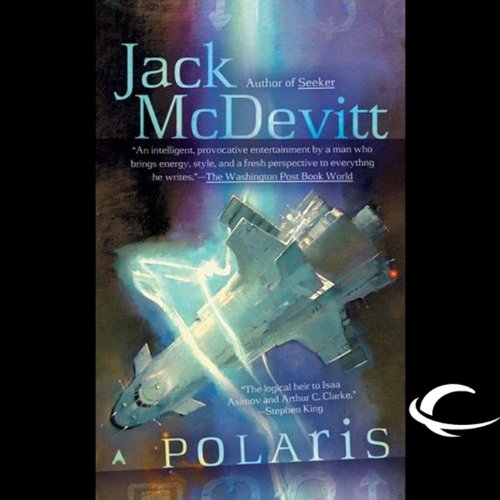 Sixty years ago, the space yacht Polaris was found deserted, the fate of its pilot and passengers a mystery. Now, to mark the anniversary of the disappearance, there is to be an auction of what was left behind on the ship. Using his insider knowledge, Alex Benedict, one of the preeminent antiquities dealers in the galaxy, secures some of the artifacts. But then an explosion destroys most of the collection, convincing Alex that drastic measures are being taken to hide what happened aboard the Polaris - which is why that's exactly what he has to find out, especially if it means risking his life.
©2004 Jack McDevitt (P)2008 Audible, Inc.
Thriller & Suspense Suspense Adventure
Show More Show Less

What listeners say about Polaris

I've listened to all the Chase Kolpath/Alex Benedict novels. I like the point of view and the character buildout. The narrator has offbeat intonation, but the wry humor of the character comes through well. Not a deep mindbender, but a fun mystery romp with unlikely heroes.

Kind of like a Magnum PI episode: not incredibly deep but entertaining...

The reading performance is perfect

Every book usually has a boring moment during which you just skim.

I am yet to find one in this series.

There are very few books that I am willing to listen to over and over again. Jennifer van Dyck's reading has made this series so immersive that I feel like I am living in that time period. I can even relate to the background characters. Now I actively seek out titles where she is a reader.

I wish there were more than 6 titles in the series.

At some point in the story everything starts to get a little predictable. I guess this is because I have read so many sci fi titles but, I still rate the story high.

If you are looking for a title (or a series for that matter) that will engage you for a few days, this series is perfect.

McDevitt creates an enjoyable futuristic environment with likeable characters and an interesting and compelling plot.

There are multiple problems here. For openers, there are few if any appreciable differences between American society of the date written and human society ten thousand years hence. No imagination used there at all There is also a problem with Alex's sexism which again gives it a 1980s feel. Worst, perhaps, the author requires his supposedly-very-smart lead characters to do VERY stoopid things ... over, and over, and over again ... just to generate excitement and plot twists. It's as bad as a teen horror flick without the goalie mask.

This is basically unforgivable. Most of what happens between the setup and the conclusion should be rewritten from scratch. But the brief twist at the end is decent.

Could you see Polaris being made into a movie or a TV series? Who should the stars be?

Oh Dear Gawd, I most certainly hope not. It would be straight to cable, and I mean the SyFy channel at best.

Great concept for a harmless little space mystery, and mildly entertaining on that basis. But this is just the Mary Celeste done with a high-tech motivation and on multiple worlds. It could as easily have been two hundred years ago on multiple continents. You wouldn't be able to tell the difference.

Awful. such bad narration, such a basic bad plot, HUGE plot holes, ingrained sexism and racist from a writer completely out of touch with reality.

it's a great story in the end. Early on it feels a bit slow and there's some repeats of plot mechanisms from the previous book. Yet overall, a great escape into a different world.

Alex and Chase try to solve a mystery when suddenly everyone seems to be trying to kill them. Who knew antiques were quite so dangerous?

This was my first and probably last McDevitt novel. Can't recommend this on any front: not enough science for the sci-fi crowd, a boring mystery that will leave mystery lovers unsatisfied, so slow moving that there isn't any tension or suspense for those who favor thrillers.

The secret that the main characters are trying to uncover has a scientific bent, but otherwise any science fiction elements are only trappings on a worn out "ghost ship" mystery. The hero and heroine aren't particularly clever (getting caught by the same trick twice) and MUCH slower than the reader/listener to grasp the nature of the mystery. I skipped the last 2.5 hours of the first section, and when I picked it up on part 2, the characters were just beginning to understand what was going on, which was obvious at the point I'd stopped listening in Part 1. So glad I didn't suffer through the needless "development." Way too much detail on things that have nothing to do with the plot.

Liked the narrator's voice, but she remains calm and soothing even during the scenes that came closest to being cliffhanger moments. She needed more animation.